First Assemblyman Reginald Jones Sawyer said it’s A-OK to ignore the Constitution proclaiming “We go ahead and make laws because we’re California and WE DO IT ANYWAYS…” and now he’s making a public call for the 2nd Amendment to be “updated.”

Updated?  You mean polish it up – kind of like a facelift? 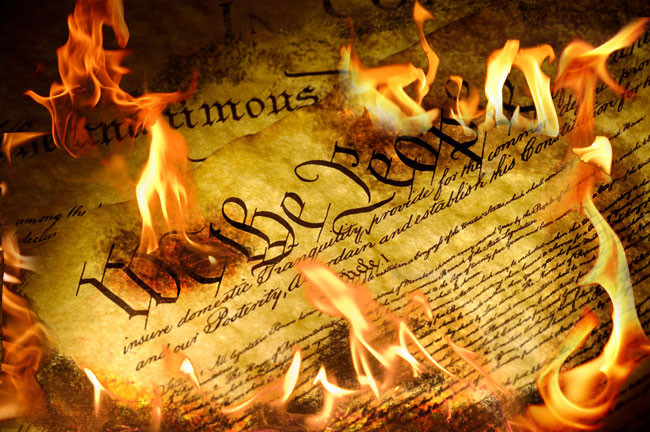 After all, he says, it was “done in 1791” and besides – there’s “no longer any tyrannical government to fight!”

Does he live on another planet? Or maybe he is just clueless about what “tyranny” means.

Merriam-Webster defines it as an oppressive power exerted by government.  Maybe he really thinks there’s no “tyrannical” government on his block in Los Angeles, but the gun owners – and those of a more “conservative” thought are facing something else altogether, and all it takes is a quick Google search to find out why.

Just recently, Jason Pittman was cited for playing the (gasp!) National Anthem on his guitar in Florida – and just last month students in North Carolina were stopped from singing some “Oh Say Can You See…”at a 9/11 memorial.  If this is not example of a tyrannical government, what the heck is?  Think First Amendment.

And embarrassing to admit in our own state, a California high school’s ban on wearing t-shirts with the American Flag for fear of “offending” other students was upheld by the 9th Circuit.

And let’s talk IRS – most reasonable folks are of the opinion that the IRS swims with tyrannical sharks – they were, after all, forced to publicly admit the agency had actually targeted – and audited – conservative groups.  And imagine this – the Environmental Protection Agency has gone so far as to garnish wages without any due process or legal judgement – for things as ridiculous as “bothering elk” and making a paperwork booboo!

GOC can only imagine what Jones-Sawyer and his cohorts would do if a SWAT team stormed into their homes in the middle of the night – with no search warrant – and demanded access to each corner of private property.  Maybe the Chairman of the Assembly Public Safety Committee should have a one-on-one with those who have faced a midnight invasion after having been been wrongly put on the DOJ’s Armed Prohibited Persons (APPS) system. That’s freaking frightening – and yes, tyrannical.  Jones-Sawyer might want to polish up on the 4th Amendment.

Of course, liberals make no bones about the scariest of all – the 2nd Amendment.  They think people with firearms are scary, and quite frankly, don’t really care that there’s a difference between a criminal waving a gun and a law abiding citizen protecting their family.  They condemn us as a threat to society, which in and of itself is a violation of the 6th amendment.

To quote columnist Kurt Schlichter, “So, what do the liberals really think of civil rights? Not much. To liberals, the Constitution doesn’t have a Bill of Rights. It has a List of Suggestions.”

Thomas Jefferson knew what our nation would be up against when he said “All tyranny needs to gain a foothold is for people of good conscience to remain silent.”  He went on to say “When the people fear the government, there is tyranny; when the government fears the people, there is liberty.”

GOC clings (not bitterly but with esteem and gratitude) to these words!