As the saying goes, “it’s all over but the shouting” and although we got sucker punched here in California, 2nd Amendment supporters have every reason to be hopeful, because what happens on the national scene will directly impact us on the west coast.

There’s a lot of hand-wringing going on post- election from every conceivable corner – the left is hopping mad that Trump bested Hillary, and the gun community is livid that Prop. 63 passed.  Are we disappointed?  You bet.  Are we surprised?  Nope.

We were outspent 3 – 1 and besides, the anti-gunners are very good liars.

Lt. Gov. Gavin Newsom raised a lot of money from his entertainment sugar daddies, and spent the bulk of the $4.25 million 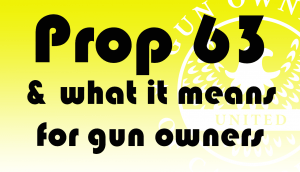 he raised just to get it on the ballot.  Our Coalition – which was financially supported by GOC, CRPA, the NRA and the Firearms Policy Coalition – plus many grassroots individuals and small businesses, raised over $1 million but that was still dwarfed by the money dumped in by Hollywood lefties.  GOC has been very open about the Coalition’s election strategy – understanding we had an uphill battle to climb given the huge fundraising gap, but if you want to know more, see our past posts on what we were doing.

We’re not just trying to be clever when we ask what everyone wants to know:  which asinine gun law trumps the other – the ballot initiative – or Senator de Leon’s legislation which was signed by the Governor this summer?  It’s gonna be a regulatory nightmare, but the mandates of each have been “merged” and the operative dates are as follows:

The bottom line is that with the election of Donald Trump also comes an appointment to the Supreme Court.  His promise to uphold the 2nd Amendment will put us in a solid position to fight in the courts, and this is the best, most stunning news we got last night.

GOC’s message has not changed – and it never will.  Until we change the fannies that are sitting in the seats of power, we are never going to get anywhere.  And we will never kick anyone’s butt out the door until the gun owner community gets off their own comfortable posterior to do it.