They were very good words to hear.

Pledging to be a “faithful servant” to the Constitution, Justice Neil Gorsuch was sworn in Monday to the Supreme Court, filling the vacant seat of our 2nd Amendment lion, the late Antonin Scalia. 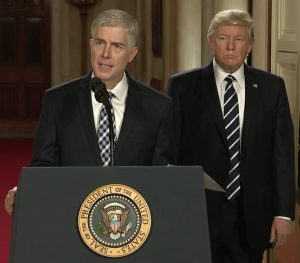 Taking the judicial oath of office in two ceremonies (one private and the other a public event), Gorsuch’s former boss Justice Anthony Kennedy administered the oath today in the White House Rose Garden.

Gorsuch, who had previously served as Kennedy’s law clerk, said “To the American people, I am humbled by the trust placed in me today…I will never forget to whom much is given to much will be expected, and I promise you that I will do all my powers permit to be a faithful servant of the Constitution and laws of this great nation.”

President Trump echoed these comments, stating Gorsuch was a man of “unmatched qualification” and that he has no doubt he “will rise to the occasion, and the decisions you make will protect our Constitution today and for many generations of Americans to come.”

After eight years of Constitutional hostility, it’s as if an inspirational and refreshing breeze has blown some common sense from the American heartland straight into the grime of Washington D.C.

Without question, the process was grueling, to say the least. The Democrats used every trick in the books to derail the Gorsuch nomination, but President Trump remained staunch in his promise to replace Justice Scalia with someone who was equally devoted to the Constitution.

This is critical for us at GOC – and other 2nd Amendment loyalists, because there are several gun rights cases that are currently making their way through the court system that could have a very real impact in California.

In Peruta v. California, Gun Owners of California and our national counterpart Gun Owners of America is challenging oppressive state laws that limit the right to carry concealed.

Our amicus brief challenges the state’s restrictive “good cause” requirement for concealed carry licenses (as if defending yourself and family were not “good cause” enough). In doing so, we are arguing that California’s laws clearly infringe the Second Amendment.

We are also arguing that the original challenge to the law interprets the Second Amendment too narrowly, attempting to appear reasonable to judges rather than relying on the robust constitutional text.

Even though it might seem that we are a few clowns short of a circus in California, we are nonetheless encouraged by what we see at the national level – and we know that this can translate to some good stuff here on the West Coast.  We are not just sitting around, though, waiting for some magical federal fairy dust to fall on us – we are fighting the anti-gun boogey men (and women) that want to take our money, our liberties – and our guns, right out of our pockets.

Stay vigilant with GOC – join us!