Forgive the politically incorrect euphemism, but there’s no alternative that really fits:  there’s more than one way to skin a cat and GOC knows it.

In our 40-plus years, we’ve used a strong three-pronged approach to beating back the leftists (those “cats” that need some skinning) whose sole purpose is to strip the Constitution – 2 Amendment included – bare. 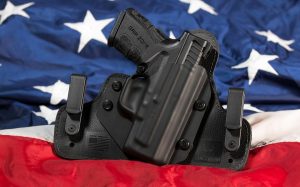 We fight full-time in the legislative halls. We fight at the ballot box. And we fight to defeat the bad guys in the courts.

This is where we have chocked up significant victories – including yesterday’s U.S. Court of Appeals for the D.C. Circuit decision that struck down Washington D.C.’s “good cause” requirement for a concealed carry permit (Grace v. District of Columbia).

Judge Thomas B. Griffith wrote “The good-reason law is necessarily a total ban on most D.C. residents’ right to carry a gun in the face of ordinary self-defense needs,” and “Bans on the ability of most citizens to exercise an enumerated right would have to flunk any judicial test.”

“The point of the Amendment isn’t to ensure that some guns would find their way into D.C., but that guns would be available to each responsible citizen as a rule,”  – Judge Griffith

Washington D.C. has long placed enormous restrictions on individual residents from possessing handguns. However, in the aftermath of the Heller decision (which struck down the handgun ban) the District established local regulations that denied “self-defense” as an acceptable reason to obtain a permit.  Of course, this is something that we here in California have experienced – especially in San Diego or San Francisco (unless you are Diane Feinstein of course).

So what does this mean to us in California?  First off, it means GOC’s members are all active participants in skinning the liberal cat.  Most importantly though, with the recent toxic Peruta ruling by the 9th Circuit rejecting “personal protection” as a sufficient reason to have a CCW, the DC decision sets up a constitutional crisis of sorts.  Having such conflicting rulings on either side of the nation creates a situation of unequal protection of a citizen’s constitutional rights.   The final decision will now be made by the United States Supreme Court.

It’s worth asking – why do some courts seem to have such a tough time understanding the words “shall not be infringed?”   Be assured that we will be involved in every legal step that comes our way.

Are you interested in helping us skin the proverbial cat – one, two or three ways? Be armed.  Be informed. Join GOC.

** GOC has emerged as the premier organization in coordinating and funding friend of the court briefs (technically known as Amicus Curiae Briefs) in support of the most significant lawsuits filed both here in California and across the nation.  These briefs are critical as they bring the voice and perspective of law enforcement, subject matter experts and/or other state firearms associations together in support of those cases. They add supplementary insight, technical expertise, and related crucial arguments to the issues considered by the judges when the cases go to trial.  These briefs are filed in various Circuit Courts of Appeal and the all-important U.S. Supreme Court.