It’s been said that a 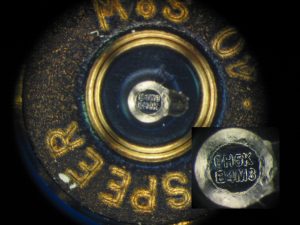 half truth is a whole lie, and boy is that evident in the world of politics.  This is particularly true when it comes to the 2nd Amendment since the anti-gunners have turned manipulating facts into an absolute art form.

Take the microstamping boondoggle, for example.  Just this week David Maccar from Range 365 delivers a solid legal and technological rundown on what’s happening in California’s microstamping world, while providing a valuable and historical perspective.

Two firearms groups have filed a new salvo of lawsuits against California’s gun laws, specifically its microstamping requirements, saying that what the decidedly anti-gun state government wants simply isn’t physically possible.  The National Shooting Sports Foundation (NSSF) and Sporting Arms and Ammunition Manufacturers’ Institute (SAAMI) have argued to the state supreme court in a filing last month that the state’s 2007 law requiring new semi-automatic handguns sold in the state to have the capability to microstamp shells is something that cannot be done.  It wasn’t possible in 2007, and it’s not possible in 2017, the filing says.                          -Range 365

Gun Owners waged battle against microstamping from the minute it raised its ugly head ten years ago, courtesy of former Democrat Assemblyman-and-anti-gun-zealot Paul Koretz.  Currently a member of the LA City Council, he brags about his glory days in the Assembly where he introduced over 70 bills to “protect” the people of California.  (During his legislative tenure, some joked he would have mandated we all be bubble wrapped before going to the bathroom, in fear that the toilet would somehow eat us – all that flushing water, you know).

Fighting tooth and nail against microstamping legislation, Gun Owners offered a first-hand look at how the technology would not work – even inviting legislators to a range to prove what happens to primers when shots are fired – how they can smear, be double-struck or flattened – whether the strike is heavy or light.  None of them took advantage of the invitation…big surprise there.

GOC also demonstrated how very easy it is for anyone to replace the firing pin, which was not illegal to do under the legislation.

And then Gun Owners Executive Director went even further – taking a basic emery board from his wife’s purse to show the ease of which one could file the pin and remove any microstamping, which is engraved at 1/26 the thickness of a human hair.

These facts were all provided, but the naysayers simply weren’t interested. In other words, “Don’t confuse us with the facts.”

Thus, in 2007, the microstamping mandate was passed as part of a package of anti-gun bills.  This initiated the litigation and even though the case was dismissed in 2015, in the waning days of 2016 a three-judge panel found on appeal the plaintiffs (NSSF and SAAMI) have “a right to present evidence to prove their claim.” Last spring, California’s Supreme Court decided the case was to be reviewed – kudos to NSSF and SAAMI for their unrelenting legal pursuit of this critical issue.

NSSF and SAAMI contend that there is no expert that can be found “to show that dual placement microstamping technology can ever be developed for semi-automatic pistols.”  All of this amounts to a piece of legislation that only serves to limit the Second Amendment rights of law-abiding citizens.

“It is not the wisdom of the legislative goal, but rather the impossible method [emphasis GOC] the Legislature has chosen to achieve that goal, that lies at the heart of this case,” the filing says.