If there were any doubt about the hatred California’s political leadership has for the 2nd Amendment, the Speaker of the Assembly put that to bed when he posted on his state website that we were “in that room” when Stephen Paddock slaughtered 60 people in Las Vegas. 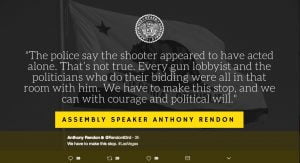 Those of us who pound the floors at the State Capitol on behalf of the thousands upon thousands of gun owners in the state are used to politicians exploiting tragedies for political gain, but when they resort to personal accusations of murder, it’s beyond what we have seen before.

Not only has he charged Gun Owners of California staff and our 2nd Amendment colleagues personally with an act of pure evil, but make no mistake:  he has also pointed his finger at every American citizen who supports the Constitution of the United States.  His ignorant statement not only demonstrates an overwhelming lack of knowledge about Gun Owners of California, but the millions upon millions of gun-owning citizens – in California and beyond.

This is a particularly cheap shot – especially coming from someone who openly supports the early release of violent felons into our communities and sentencing reductions for those involved in gun-related crimes.  Clearly, rational thought is not making its way from Rendon’s mouth to his brain, but this is not abnormal for leftists.  Of course, he is not alone in his condemnation – the Hollywood brain-trust has jumped on board because they are particularly good at exploiting human tragedy.

Rendon and other such statements that the 2nd Amendment community is responsible for the massacre of 60 innocents cannot be chalked up to casual insinuations.  It was an in-your-face indictment that is dishonest and foul and beneath his position as leader of a legislative body.  GOC disagrees with the Speaker on his political agenda, and even though he supports legislation that returns dangerous felons to our neighborhoods, we will not personally slander him.  We will not lie.  We will tell the truth always, without spraying the blood of innocent people at his feet.