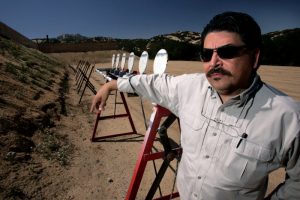 Marc Halcon fits East San Diego County like a glove.  Much like it’s rugged landscape, he’s gritty, tough and robust – which is a sharp contrast to the slick, urban beaches to the West of this Southern California metropolis.  This, plus his fierce defense of the 2nd Amendment might explain why he’s been the target of liberal environmental elitists for years.  In 2017, their war against Halcon’s Covert Canyon has intensified and should make every pro-gun activist sit up and take notice.

Covert Canyon is an extraordinary facility that has offered highly specialized military-style training, firearm and medical schooling for law enforcement personnel.  An invaluable resource to San Diego county, it’s 160 acres in the eastern hills of San Diego boasts three ranges and high intensity training that is simply not available elsewhere in the region.  The entire reason Halcon bought the property was “because it was the last place that’s an unrestricted shooting area.”

This has caused some serious heartburn for San Diego’s premier liberals, and they have brought forth every sticky form of bureaucratic red tape and legal challenges imaginable.  Operational agreements with the County have been rescinded and altered.  Restraining orders have been filed.  A discontented neighbor had the audacity to lie publicly that they have to drive through “live fire” to get to their property. Even PETA has weighed in – citing “animal cruelty” during perfectly legal medical field training.

If that weren’t enough, a local TV station has jumped on board because they smell the blood of what they think is a good news story.  The fact that the target is a renowned firearms expert and vocal proponent of gun rights has CBS (Channel 8) reporters chomping at the bit.  We all know that much of the media has never met a conservative they weren’t eager to skewer, and this time Marc Halcon is on Channel 8’s spit. Not only have they misled the public about Covert Canyon, they are also using the move of Marc’s other business (American Shooting Center) to a new location to feed the financial rumor mill.

Gun Owners of California will never let fake news tell a story as important as Marc’s without presenting the other side.  He has spent over $900,000 dollars working to comply with the County’s changing demands and fighting off the relentless pursuit of anti-gun lawyers to shut him down.  His chief antagonist is none other than environmental attorney Marco Gonzalez, who is also the brother of uber-liberal San Diego Assemblywoman Lorena Gonzalez-Fletcher.  Now, with the CBS hatchet job taking a viral turn, this fight has become personal, with Gonzalez preening before cameras citing “karma.”  What has not been reported, however, is that Gonzales sued the county and Marc…and lost!   He then filed an appeal to the 4th District Appellate court, and lost again!   Gonzales was left with only one choice: attack with a round of fake news and personal insults.

Marc Halcon has been a loyal friend to GOC; his expert testimony at the Capitol and ardent support of our rights will not be forgotten.  Unfortunately, the shut-down of Covert Canyon and the location shift of the American Shooting Center has created a financial shortfall; thus, a GoFundMe page has been set up by some of Marc’s local supporters to help fill in the monetary gaps.  Check it out here.

100% of the funds will be used to satisfy the local and state requirements, as well as pay any fees or taxes, or payments required to maintain the operation standards and will be used exclusively for Covert Canyon Training Center.