California and the rest of the country can learn a great deal from Kentucky’s response to the recent school shooting that tragically took the lives of two young students.

Rather than running to the nearest news mic to c 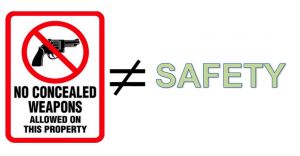 ry for more gun control, Republican State Senator Stephen West introduced Senate Bill 103, which would allow schools to appoint “an employee in good standing of a local public school district or private or parochial school” with a concealed-carry license to become an armed “marshal” at the school.  Co-sponsor Senator Ralph Alvarado said the legislation would loosen state restrictions for guns on school property.  This bill would apply to all schools in the state but would be a big boon to those in more rural areas.  Kentucky has 264 police officers who serve as school resource officers at schools in only half of the state’s counties, “but for some of our rural counties, which are small, they can’t afford it,” Alvarado said.

Next, Kentucky Congressman Thomas Massie began a full-court press on his HR 34, the “Safe Students Act” which would repeal portions of the federal criminal code that forbids firearm possession in a school zone. Put simply, this would very effectively make it much easier for CCW holders to defend themselves and students.

Even though the specifics differ, current law in 25 states permits teachers and staff to carry guns in some manner.  Some states have full permission for teachers and staff to carry, and others leave the decision-making with school officials or school board members.  Federal law, however, is vague and such ambiguity opens the door to potential – and very negative – prosecution by the feds, which is why Massie is pushing the Safe Students Act.

But no surprise to GOC, California’s legislature has trotted down another path, because they took a reckless law and made it even more irresponsible.  The downright stupid policy that forbade a lawful CCW holder from entering any school campus without official permission was just too scary for Sacramento lefties.  Their new solution to this non-problem was characteristically extreme with a “no way – no how” policy. Now, no CCW holders allowed.  EVER.

Rather than the popular “This is a Gun Free Zone” sign at the entry of each school, the intellectual elite who run California’s political show might consider one that says “OUR CHILDREN AND TEACHERS ARE COMPLETELY DEFENSELESS – COME AND GET US!”

This is not meant to be rhetorical, but rather provocative and thought-provoking.  The “active shooter” situation is as serious as the tragic blood on the floor of Kentucky’s Marshall County High School.  The Left screeches that it is people like us at GOC who are to blame for the bloodshed; they revel in holding the law abiding responsible for the crimes of monsters.  And their solution is to leave us – and our children – vulnerable to the criminally evil.

The heroic actions of one armed individual can save many.  The question begs an answer: What’s so scary about that?