We live in a stupidly hyper-sensitive society.  When a woman is so frightened by a man wearing a pro-gun t-shirt that she has to call the cops, we have a problem.  We have an even bigger problem when it happens in Texas.  “I cannot believe how the media has convinced so many people that guns are scary,” said Troy Johnston, who was at a park playing with his daughters. “This lady was having a literal panic attack.” 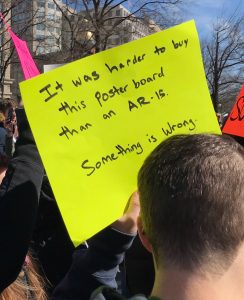 That being said, we can only imagine whether anyone is going to wet their pants when they see students actually taking the time to peaceably march in support of firearm ownership.

GOC gives huge kudos to the brave move by the New Mexico student who is behind the national “Stand for the Second” student walkout today.  Yes, this is a bold and brave move, not just because it’s in support of the 2nd Amendment, but because the backlash against pro-gun efforts has become incredibly vile and ugly. It takes someone with real intestinal fortitude (guts) to get out in front of an issue that has sadly become ridiculously controversial.  The question is, will this kid and his friends across the country be charged with having blood on their hands for supporting gun rights?

According to Will Riley, “Stand for the Second” organizer extraordinaire, “We chose May the second, since our theme is ‘Stand for the Second.’” When seeking permission from his school principal he explained “this is just something that we want to have an equal playing field. We’re only asking for 16 minutes, one minute less than the National Day of Action had. We chose 16 minutes because it is estimated that 1.5 million people use a firearm to defend themselves; if you break it down with our 16 minutes, that’s 91 people using a gun in a responsible and correct way without hurting innocent people.”

How refreshing to see young people factually articulate specifics, rather than a group of angry teenagers chant some ignorant anti-gun slogan and carrying signs about an AR 15 being easier to buy than, um, poster board.

Refreshing indeed, because if we are to believe media reports, just about every kid out there under 18 supports gun control. Explaining why they believe this is another thing entirely.

Our national sister organization Gun Owners of America took to the streets during the recent March for Our Lives protest, and what they found came as no surprise.

“No marcher I interviewed could name for me a single gun control law that criminals would obey, but they were all sure that arming adults in schools would not work to save lives,” GOA’s Executive Director Erich Pratt observed on Twitter.

Protesters were unable to give substantive solutions on school shootings. In fact, when one protester was asked about a solution for school safety, her response was simply, “ban guns.” Another protester stated she was against arming teachers but admitted she “[didn’t] know the facts about it.” To view the video, click here. 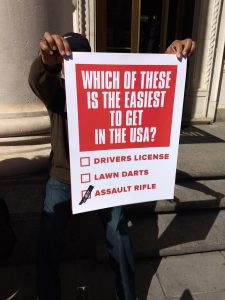 And, to quote Brandon Morse of Red State, “One of the best things about lefty marches is that people bring all sorts of signs that reveal their hatred and/or ignorance of the thing they’re protesting for. Thankfully, the “March for Our Lives” is no different.”

Signs ran the gamut, from the (big surprise) childishly profane to the truly oblivious, like the one calling for banning guns instead of boobs.   Or the one suggesting we ban all automatic weapons.  Oh wait – they’ve been illegal since the 30’s, but let’s not confuse anyone with the facts (1934 NFA). Check out the nutball signs here.

We are sure the Left will dismiss the pro-gun students who braved the ignorant court of public opinion and poo-poo the smaller numbers of kids who gathered.  GOC contends, however, that these students have more courage in their pinkies than the vast majority of kids who jumped on the anti-gun bandwagon. Why?  Because they stand for something and they know exactly why.