The 9th Circuit Court of Appeals has been a long-standing and painful thorn in the side of 2nd Amendment supporters.  This court has stiff-armed our Constitution for decades. 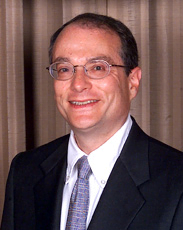 Finally, some good news: there’s a vacancy which means President Trump has a chance to make a big move and revolutionize it’s left-leaning reputation.  The bad news is that this incredible opportunity might actually go to waste.

Instead of appointing a judge who respects our Constitution, President Trump has stunningly nominated Mark Bennett, who, as Hawaii’s Attorney General, is on the record for opposing the Supreme Court’s determination in Heller that the Second Amendment is an individual right.

This is the wrong move – particularly given the President’s own frequent (and appropriate) criticisms of the 9th Circuit as “disgraceful” and having a “terrible record of being overturned.”

Indeed, the chance to drain the swamp should also translate to flushing the judicial toilet as well.  Replacing one liberal with another won’t fix anything. It promises to be the same-old-same-old, which is an open door to the continued destabilization of the 2nd Amendment.

Of his own court, 9th Circuit Judge Richard Tallman has said decisions “continue to slowly carve away the fundamental right to keep and bear arms” and “lacerates the Second Amendment, deepens the wound, and resembles the Death by a Thousand Cuts.”  He is abundantly correct, and given this superb opportunity, the President should make certain Tallman is joined by others who share this perspective.

The 9th Circuit Court of Appeals has jurisdiction over districts of California, Alaska, Arizona and Hawaii.  It is a powerful court that renders decisions that impact every citizen in our state, and we deserve to be heard.  Read the official alert below by Gun Owners of America, our national, sister organization.  They have been out in front on the opposition to the Bennett nomination from the get-go:

Yet, Trump has nominated a leftist, anti-gunner to fill a seat on that court, and the Senate Judiciary Committee has approved that nomination — despite GOA’s opposition to the nomination.

The nominee for the nation’s second highest court is Mark Jeremy Bennett who, as Hawaii’s Attorney General, opposed the Supreme Court’s determination in Heller that the Second Amendment is an individual right.

Bennett also opposed GOA’s right to participate in the legislative process, which was affirmed in the Citizens United decision.

But, in spite of Bennett’s reliably left-wing leanings on these and virtually ever other issue, Trump and weak-kneed Republicans seem inclined to reward him with a promotion and pivotal seat on one of the country’s most important courts.

The left-wing Alliance for Justice, which has slow-walked all of the rest of Trump’s judicial nominees, approves of Bennett, calling him “mainstream.”

So here’s a suggestion: since anti-gun senators are blocking a vast number of Trump’s judicial and executive nominees, Republicans would be fools to consider Bennett before the entire backlog of conservatives has been approved by the Senate. 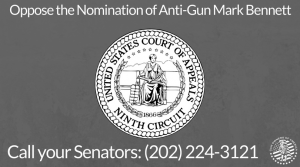 Think about it: Senator Chuck Schumer and his gang of anti-gunners are blocking dozens of pro-gun nominees.

If we reward them by passing gun controllers while blocking constitutionalists, we have every right to ask why keeping Republicans in power in the Senate confers any advantage.

So please take action. Urge your Senators to oppose the nomination of Mark Bennett.