So, what’s all the fuss about the upcoming vacancy on the Supreme Court of the United States? 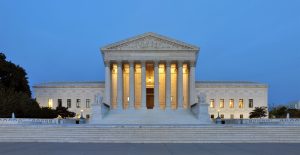 The fuss is real. Whether you sit on the right – or on the left – the fuss is important – that is, if you happen to value the Constitution or maybe you think it should be tossed like yesterday’s newspaper.  If you value your 1st Amendment freedom of speech, religion or assembly, or the 4th Amendment’s protection against wrongful search and seizure, or the 5th, where our rights to due process, private property and self-incrimination are guaranteed, you may be interested in what’s going on at the nation’s highest court.  If you believe any of these enumerated rights are essential to your freedom – either positively or negatively – and could impact how you live your life, then you just might agree that this is one of the most important decisions that Donald Trump will make in his entire presidency.

That’s what all the fuss is about.

Gun Owners of California cares about every amendment in the Bill of Rights – from the 1st to the 10th.  Since 1976, however, we have been laser-focused on the 2nd, because as George Mason warned in 1788 “To disarm the people…[i]s the most effectual way to enslave them.”

Each culture since the beginning of time imagines they possess more knowledge than anyone who came before them.  New information and new technologies, whether the cotton gin, the telegraph or the cross-country railroad has led us to imagine that with each generation, we become more enlightened – and we are surely no different.  After all, we have computers, smart phones and scientific calculators.  We don’t need a slide-rule to build bridges and skyscrapers.  Heck – we have Google.  We don’t even need to think anymore because that’s what Siri and Alexa are for, right?

And of course – those tired, old dudes who framed our Constitution and wrote the Bill of Rights just didn’t have the ability to grasp how very different life would be in 2018.  In 1923, Woodrow Wilson even fell victim to such illogical thought, stating “The Declaration of Independence did not mention the questions of our day. It is of no consequence to us unless we can translate its general terms into examples of the present day and substitute them in some vital way for the examples it itself gives, so concrete, so intimately involved in the circumstances of the day in which it was conceived and written.”

Wilson and the progressives who came after him are doing what liberals do – they pick at the external while ignoring the internal – a band-aid approach on the stench of dying organs.  Our founders didn’t need to understand life in the 21st century to know the difference between right and wrong.  George Washington understood the significance of the 1st Amendment in 1783 when he said, “If the freedom of speech is taken away then dumb and silent we may be led, like sheep to the slaughter.”  The Founders didn’t have to read the Wall Street Journal to know the overspending of the 20th century was damn stupid.   They understood a big government would be an inefficient government – that’s just common sense.  They didn’t have to experience a recession or depression to know debt would cause issues for future generations.  They also had first-hand experience that taxation without representation was tyrannical.  And they sure as heck didn’t have to experience a school shooting to know the blame must lie with the offender – no other human and certainly not some inanimate object.   It might be difficult to imagine but even Scripture says, “What has been will be again, what has been done will be done again; there is nothing new under the sun.” (Ecclesiastes 1)

To infer that the brave men at the center of our country’s birth are now irrelevant – who, by the way, stood to be executed if they failed to secure independence from England – is beyond maddening.  It’s arrogant.   Big-headed.  Condescending.

How very extraordinary for us today that in founding our nation, these men understood the positive, boundless nature of the human spirit and what true freedom could offer to anyone – regardless of circumstances.  It is equally as remarkable that they grasped human nature’s negatives as well and what dangers would be presented with unchecked government power.  There are a lot of good reasons why George Washington was our first president – he was a smart and wise fellow.  He was right then and is right now when he said “Government is not reason; it is not eloquence; it is force! Like fire, it is a dangerous servant, and a fearful master.”

So back to all this fuss with the vacant Supreme Court seat.  This is as important as it gets.

The President has indicated he will appoint a strict Constitutionalist – along the lines of our hero the late Justice Antonin Scalia.  With a host of 2nd Amendment cases pending in appellate courts across the US, GOC, GOA and Gun Owners Foundation will be waiting.  We will be watching.  And we will be praying.

“Are we at last brought to such a humiliating and debasing degradation, that we cannot be trusted with arms for our own defense? Where is the difference between having our arms in our possession and under our own direction, and having them under the management of Congress? If our defense be the real object of having those arms, in whose hands can they be trusted with more propriety, or equal safety to us, as in our own hands?”
Patrick Henry