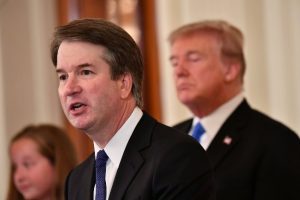 Are we fist-pumping the Supreme Court nomination of a “true 2nd Amendment radical” by President Trump?  You bet we are.

The same can’t be said for the left. The tantrums!  The melodrama!  The news is awash with cries that the world is quite literally coming to an end.  There will be an explosion of gun violence.  We will return to the days of the wild, wild west – we are on the precipice of our “worst nightmare.”

Connecticut Democrat Senator and anti-gun zealot Chris Murphy cried publicly “Brett Kavanaugh is a true Second Amendment radical. He believes assault weapon bans are unconstitutional, a position way out of the judicial mainstream, far to the right of even late Justice Scalia.”

Radical?  No.  Able to appropriately interpret the Constitution? Yes. Let’s break this down:

Preliminary examination positively confirms (using a liberal v. conservative scale) that Kavanaugh is to the right of Scalia — and Justice Neil Gorsuch.  Such analysis is surprising – and yet we would hardly call it a problem – especially when it comes to the 2nd Amendment.

His most significant gun-related decision was Heller II, where Kavanaugh filed a dissent arguing that D.C.’s ban on semi-automatic firearms was arbitrary and unlawful.  In fact, this dissent was so well argued that subsequent legal briefs filed by Gun Owners of America (GOC’s national sister organization) have repeatedly held up his dissent as the model to follow.

What’s more, Kavanaugh also correctly interpreted the Firearm Owners Protection Act to find that a defendant could not be sentenced to 30 years in prison for use of a fully-automatic firearm if he was unaware that the gun fired automatically.

And, in a decision unrelated to citizens’ right to keep and bear arms, yet crucial to us advocating in defense of the 2nd Amendment, Judge Kavanaugh affirmed our voice in the political arena when he supported the prevailing opinion in the Citizens United case.

Connecticut’s other anti-gun extremist is Democrat Senator Richard Blumenthal, who issued a fervent plea to the survivors of the school shooting in Parkland: “If you care about common-sense gun violence protection, Judge Kavanaugh is your worst nightmare.”

Bring on the nightmare.  Please!

On the flip side, Senator Ben Sasse (R-Nebraska) suitably summed up the Kavanaugh nomination when he quipped, “We’re less than 24 hours into this, and folks are already declaring that if you can’t see that Brett Kavanaugh is a cross between Lex Luthor and Darth Vader, then you apparently aren’t paying enough attention,” concluding that “The American people are smarter than that.”

It’s no surprise that both California’s Senators Feinstein and Harris have already expressed their disdain for President Trump’s pick and will vote no when the time comes. It doesn’t matter to them whether Kavanaugh has the knowhow to ably interpret the Constitution as the framer’s intended – because they think those old dudes lacked the intellect to understand life in 2018 (read more on that absurdity here).

GOC and GOA hope the Senate will confirm Kavanaugh — and that the Supreme Court will take up more 2nd Amendment cases, thus repealing the onerous and unconstitutional restrictions on the right to keep and bear arms that exist throughout the country.