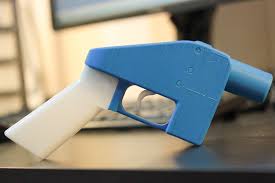 There’s nothing more interesting than watching the Left and their media compatriots get their panties in a bunch over nothing.  With each passing day, the teeth gnashing grows more feverish and now it’s all about 3-D guns.  If we were to believe what’s been broadcast this week, we are all in danger – and to pull from “A Few Good Men” – it’s grave danger, because there really isn’t another kind, right?

This is not some situation where the truth lies somewhere “in-between” – what the media has reported is flat out wrong. We spend an awful lot of time at GOC correcting / clarifying / educating people on the facts, and there sure is a lot to sort through when it comes to the Left’s most recent 3-D histrionics.

The outcry began when a settlement was reached between the State Department and Defense Distributed, which was supposed to permit Cody Wilson’s company to digitally download – not guns, but plans/designs for 3-D printed firearms.  To reiterate – the settlement was to permit the release of downloadable blueprints – not an actual weapon as the anti-gun zealots would have all of America believe. (Skeptics of media bias, check out quotes below).

In his recent article “Let’s Debunk the Misleading Panic Over 3D Guns”, the Federalist’s David Harsanyi  corrects the verbal hallucinations with  “First of all, “3-D Plastic Guns” aren’t being sold to the public. Nor are “downloadable firearms” or “ghost guns.” These things don’t exist. Data, code, and information is being sold to the public. There is no magical contraption that creates a new gun on demand. Sorry.”

NSSF has weighed in as well, citing “The technology to 3D print firearms, in itself, does not present a new problem or likely threat to law enforcement. Americans have had the ability to make firearms on their own and do. It has not created a wave of “ghost guns…” and that “Firearms regardless of how they are manufactured are regulated. While it makes for a scary headline, the fact is that it is illegal to produce an “undetectable” firearm. The 1968 Gun Control Act, the Undetectable Firearms Act of 1988, and other federal laws all govern firearms produced by a 3D printing process, just as they apply to conventional manufacturing processes using machine tools. The regulations require metal in these guns so that they are detectable (they always have been).

If the argument is that criminals won’t follow this law, then we can finally agree that, by definition, criminals don’t have respect for the law. If the technology at some point in the distant future reached the point where fully-functioning, safe and reliable firearms could be brought to market, the sales of such firearms produced with this technology would be governed by existing federal laws.”

These are very convenient facts that the talking heads love to ignore.   They are also as “un-scary” as one can get – we have nothing to fear, as Harsanyi says, from a “hobbyist milling a lower receiver for a commercially popular civilian firearm in his suburban Pennsylvania garage.”

Let’s be real here:  Generally speaking, liberals have a tough time with historical fact – that’s why they feel the need to tweak stuff here and there (I’m being kind) in an effort to defend their rhetoric that guns are responsible for all the world’s ills.  Plus, the media has an extraordinary tendency to be lazy because if they did a little digging, they would realize that resourceful individuals have been building firearms in a non-traditional manners for hundreds of years.

LESTER HOLT on NBC Nightly News: “Let’s turn now to a late development in the race to stop what some fear is the next gun threat: plastic weapons. 3D knockoffs lethal, homemade, and hard to detect. The technology is accessible and so are the guns.”

Harsanyi rightly makes the point that the anti-gun crowd is “purposely misleading”, and using scare tactics when they allege that “Joe Criminal can now merely push a button and “print one at home” with his 3-D applications and PC-connected milling machine…why criminals would bother spending thousands of dollars to create a one-shot plastic gun (that probably won’t work) when they can walk into a store and buy a reliable shotgun for a few hundred dollars, or procure a weapon illegally for far less?”

Good question.  This is not rocket science – these are basic facts that lead one to a reasonable conclusion.  There’s no problem here with 3-D guns – it’s nothing more than the “same-old-same-old” squawking that guns are evil and lead to all manner of death and destruction.

Speaking of which, “Downloadable death” is how actress and self-appointed expert Alyssa Milano has described the 3-D issue.  Again – we’ve got some seriously lazy thinking here.  As NSSF reports “Those complaining that street gangs will be setting up computer printing labs to produce untraceable firearms aren’t dealing in reality…Three-dimensional printing isn’t cheap. That’s a fact. It costs hundreds of thousands of dollars and many hours to produce firearm parts using this advanced printer technology and the required computer-aided design & computer-aided manufacturing (CAD/CAM) software.”

“This changes the safety of Americans forever if this is allowed to happen,” decried anti-gun Parkland father Fred Guttenberg on NBC. “Now, every American in the homeland is at risk. Terrorists, they want to home produce guns now in this land, they can.”

We certainly aren’t surprised that the media has taken a benign issue and gone full-tilt meltdown.  This is business as usual – the Left and their media buddies are more than happy to play fast and loose with the truth because honesty is just too…scary.

David Harsanyi is a Senior Editor at The Federalist. To read his full article on the 3-D gun issue, click here.  Also, please take the time to check out his forthcoming book,First Freedom: A Ride Through America’s Enduring History with the Gun, From the Revolution to Today. Follow him on Twitter.