Turning Point USA is the largest and fastest growing youth organization in America.  They have an impressive presence on over 1,300 college campuses and h 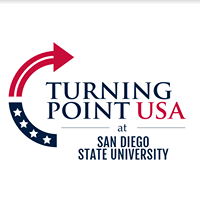 igh schools across the country – and this makes a lot of people very uncomfortable.  Not GOC though.  We love it.

The SDSU chapter of Turning Point is sponsoring “Gun Rights Are Women’s Rights” on November 8, a panel discussion focusing on the importance of the 2nd Amendment as it “relates to a woman’s inherent right to defend herself.”  The event is set to feature 2nd Amendment advocates Antonia Okafor, Amy Robbins, Xena Amirani and Anna Paulina, but instead of encouraging a healthy dialogue on a timely issue, the university has been less than helpful.  It took some persistence but TPUSA was ultimately able to nail down time and location, which meant they finally had the green light to publicize, but within limits.  Posting flyers is evidently a big no no.

Skyler Shibuya, SDSU Turning Point president said “Every year, hundreds of thousands of women protect themselves from sexual assault, rape, and murder by exercising their Second Amendment rights. Conventional women’s rights dialogue has completely ignored this fact, so we have taken it upon ourselves to forge our own dialogue that calls attention to real solutions that truly empower women. Gun rights are women’s rights.”  To read the full statement, click here.

Even if the University doesn’t embrace pro-2nd Amendment politics, an open discussion is exactly the type of event SDSU should celebrate.  There should be zero barriers in the ability of Turning Point students – or any other group – to organize and publicize the forum.  Unfortunately – yet not surprisingly, open dialogue on gun rights has triggered bad behavior – there’s been some vandalism and Turning Point captured a profane tantrum by a female SDSU student.  Check out the video here.

The free-speech college campuses of yesterday are long gone – they’ve been replaced by a culture teeming with sobbing students who are demanding “safe spaces” that are free of any talk that offends them.  Instead of being the backbone of higher education, free speech now seems to be the boogeyman of the snowflake generation.  Daniel Gelertner of National Review recently wrote “What is particularly shocking is that students can be so delicate and so violent at the same time, like oversized toddlers who careen around a room smashing into everything…”

This is hardly surprising — college students have always been self-righteous, ignorant, and arrogant. But universities were traditionally run by adults with the purpose of turning boys and girls into men and women.
Daniel Gelertner, National Review – April 2018

According to Gelertner, “A recent Gallup-Knight survey reported that 53 percent of college students think that “diversity and inclusion” are more important than free speech, and more than a third of students believe they ought to shout down a speaker with whom they disagree.”

Since when did talking about an amendment to our Constitution – the very foundation on which our country was founded – become so….touchy?

Turning Point’s mission is to build the most organized, active, and powerful conservative grassroots activist network on college campuses across the country and to promote the principles of freedom, free markets, and limited government.  Scary, right?

Larry Atkins teaches journalism at Temple University and Arcadia University and is also a contributor to the Huffington Post.  He recently addressed the current dilemma of squelching conservative speech on college campuses.  He wrote “As a liberal university professor, I am heartened and encouraged by an awakening of young people in speaking out about social issues and … while I strongly disagree with the messages of controversial conservative pundits, I think they should be heard on college campuses. I am not encouraged by the violence of the Middlebury, NYU and Cal-Berkeley protesters and their actions of shutting down speakers that they disagree with.”

GOC is on the flip side of Atkin’s politics, but seriously – can we get an AMEN?  Obviously, there are more than just a few differences between the political right and the political left.  We value the First Amendment to the constitution because it guarantees anyone, anywhere, the right to say what they want.  No matter how ignorant or offensive it may be.

For additional information about the Gun Rights are Women’s Rghts forum, click here.

*Antonia Okafor is one of the country’s foremost advocates of concealed carry on campus. In 2015, Antonia made a permanent mark in the second amendment community, when she became the Southwest Regional Director for Students for Concealed Carry on Campus (SCCC), where she advocated for the passing and successful implementation of the concealed carry on campus in Texas law known as, “campus carry.

*Amy Robbins founded Alexo Athletica because no product existed on the market that would meet her need to feel fashionable while carrying in active wear. So, she jumped on the opportunity to not only provide fashionable, functional carry-wear but create a movement of empowered women that could Carry With Confidence.

*Xena Amirani is the Chairwoman, National Executive, and co-founder of March 4 Our Rights Inc., a nonpartisan political nonprofit 501(c)(3) organizing for the protection of schools and Constitutional rights.

*Anna Paulina is a veteran and freedom fighter who is Turning Point USA’s Director of Hispanic Engagement.