Sometimes California is referred to as the “Left Coast” – or “behind the razor wire” – neither of which is exactly complimentary. And sadly, such less-than-flattering labels are true, especially when it comes to politics.  Jack-booted leftist thuggery is alive and well in the Golden State, and they have their feet firmly on the necks of freedom-loving pro-2nd Amendment citizens. They may have us hamstrung legislatively, but there are other ways to fight back.  In fact, we have some terrific news to report on the legal front.

Just yesterday, the U.S. Supreme Court agreed to review a case that challenges New York City’s near-prohibition on possessing or transporting handguns.  This is terrific news given that this is the first major Second Amendment challenge to be reviewed by the Supreme Court in almost a decade.  Our federal counterparts, Gun Owners of America (GOA) and its litigating arm Gun Owners Foundation (GOF) have submitted an amicus (friend of the court) brief that directly challenges decisions by judges that have undermined and outright ignored the 2nd Amendment.  These lower court decisions have effectively abandoned gun owners that live in restrictive anti-gun states such as California with a second-class right to keep and bear arms.

Don’t fall prey to the belief that a case in New York can’t impact California –with a more robust and pro-2nd Amendment Supreme Court, it can and hopefully, it will. To read more about this case NYSRP v. NY City*, click here.

Another case that could also yield some pro-2A smackdown in anti-gun states started in Kansas.  GOA and GOF are continuing in defense of Jeremy Kettler, a disabled combat veteran, who was convicted for violati 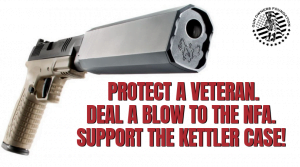 In 2014, Jeremy bought a suppressor from a local military surplus store.  Because Kansas statute exempts any suppressor manufactured, possessed, and used within the borders of Kansas from federal law, he did not go through the ATF registration process (pursuant to the National Firearms Act (NFA).  Fully believing he was in compliance with state law, Jeremy did what many people do these days:  he posted a video about his new suppressor on Facebook, and BOOM.  ATF was on his doorstep and the bureaucratic thuggery began in earnest.  Did they go the reasonable route and simply require Jeremy to register his suppressor?  Why do that when they could make an example of someone who has honorably served our nation?

The Obama Justice Department thought the smarter path was to bring criminal felony charges against Jeremy for his possession of an unregistered suppressor. He was indicted, and convicted of possessing an unregistered silencer, and is now a federal felon and prohibited from possessing any firearm.

GOA and GOF have stepped in to help Jeremy, both in his appeal to the U.S. Court of Appeals for the Tenth Circuit, and now in the U.S. Supreme Court. Jeremy’s petition questions the legitimacy of the National Firearms Act as well as the Tenth Circuit’s illogical decision that the Second Amendment applies only to “bearable arms” — but not firearm accessories, such as suppressors.

This month, GOA and GOF lawyers filed a petition for a writ of certiorari in the U.S. Supreme Court, asking the Court to hear Jeremy’s case. The petition challenges the decision of the United States Court of Appeals for the Tenth Circuit, which rejected Jeremy’s appeal from the district court.

Positive decisions in both the New York and the Kettler case could have significant bearing on gun laws across the nation – and yes, even here in California.  Behind the razor wire.

Read GOA’s petition for certiorari before the U.S. Supreme Court.

* The NRA is the plaintiff in this case and GOA is pleased to join their efforts.