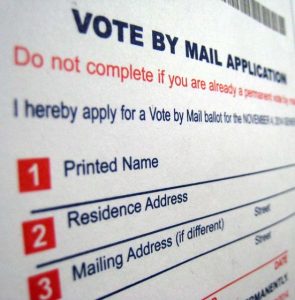 And what do you get when you go even further and allow any Tom, Dick or Harry to personally collect your ballot and hand deliver it to your polling place?  You get a hot mess and it’s called “ballot harvesting” – it’s a new thing in California and simply put, it’s a perfectly legal way to commit voter fraud.  We have one election down and it’s already scorched the butts of many pro-2nd Amendment Californians.

In 2016, Gov. Jerry Brown signed legislation (SB 1921/2016) that changed the law allowing a family member to return a ballot to a polling place.  Now, state law permits a third party (that would be any Tom, Dick, Harry or some liberal political operative) to collect mail-in ballots and hand-deliver them to polling place/election office.  Now while this may seem relatively benign (what could possibly happen?), th 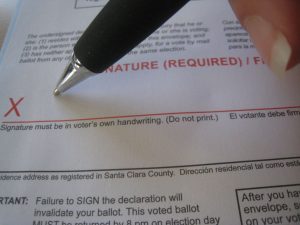 is utterly and uniformly removes any protection against fraudulent voter activity.

According to the watchdog voter registration group Counted as Cast, the new law allows “anybody to walk into an elections office and hand over truckloads of vote-by-mail envelopes with ballots inside, no questions asked, no verified records kept…”

The possibilities are endless! Townhall.com asked the burning question “Imagine…what happens if, for example, a [ballot harvester’s] house visit has a ‘Make America Great Again’ flag planted in the front yard? Could [the operative] go there…pretend [to be a supporter], then toss the completed ballot on their way to Ben & Jerry’s?”  Well, that’s a no-brainer.  Of course this is a possibility, as is targeting a home of someone who has no intention of voting and using some sort of coercive tactics to get them to turn over their ballot – to a completely unfamiliar individual.  This gives new meaning to “stranger-danger” and is a serious warning to all who vote-by-mail:  Never give your ballot to someone you don’t trust 100%.

The left-leaning LA Times even warned about this, rebuking Democrats and charging that “…[they] set themselves up for … allegations [of fraud] when they passed what really is an overly permissive ballot collection law.  It was written without sufficient safeguards, and suspicions of abuse were inevitable.”  The Times goes on to actually concede the point that “it does open the door to coercion and fraud and should be fixed or repealed before the next election.”  They went on to cite evidence in a special election for an Assembly seat where aggressive campaign workers were pressuring voters to hand over ballots – and this was done on behalf of the candidate that ultimately won the race.

In Orange County alone, vote-by-mail drop-offs was “unprecedented – over 250,000” and the losses were absolutely attributed to ballot harvesting by local political leaders.

“Doesn’t it also encourage ballot collectors to gather the ballots and then ‘lose’ them – oops! – on the way to the drop-off? Isn’t there the possibility that they might pay voters to handover their unfilled mail ballot?”
LA Times editorial 12/7/2018

Even though there were warnings a plenty that ballot harvesting could spell disaster for pro-2A candidates (and elected officials), there is little evidence that anything was done to take advantage of harvesting scheme themselves.  And in the aftermath of the shellacking, we have heard nothing but crickets – zero acknowledgement that an awful lot of folks were just plain asleep at the wheel, failing to adequately engage in an election-style battle.  In a desperate move to avoid criticism or blame on the disastrous losses, many instead have cited an anti-Trump backlash.  We call baloney on that one.

We need to wake up and realize that we are dealing with people who aren’t honest.  Ballot harvesting was introduced as nothing more than a means to “help” people, which it did.  It helped a lot of anti-gunners get elected in California.