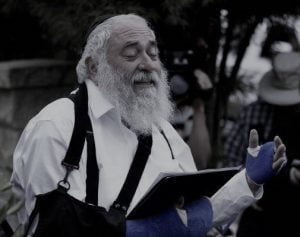 “Please arm yourself when you are here; we never know when we will need it.’”

How many new stories about the synagogue shooting led off with that comment?  Yet that’s exactly how Rabbi Yisroel Goldstein encouraged an off-duty border agent who worshiped at the Chabad of Poway.

Armed worshipers – armed anyone, for that matter is not the narrative the media wants to pursue.  Vilifying the gun rather than praising the heroic acts of armed citizens just doesn’t fit into their “guns – bad, people – good” fantasy.

In the aftermath of last October’s Pittsburgh synagogue shooting that left 11 people dead, Rabbi Goldstein said “All houses of worship felt very vulnerable,” adding that he “absolutely” was fearful his congregation might face a similar attack. The rabbi wanted to hire armed security, but the cost was prohibitive.

But Rabbi Goldstein is a rare breed in a world where wisdom is in super short supply.  He decided it was necessary to rely on armed volunteers. But as months passed, Goldstein said he felt an attack was less likely.  Still, many times he asked off-duty border patrol agent Jonathan Morales to carry a gun to services as a preventative measure, just in case need for it should arise. He said “whenever we had extra help, we were grateful for it.”

And they needed it last week, because a cowardly thug entered the synagogue intent on killing.  Morales, who drove three hours to worship not only bravely dashed after the shooter who had just murdered Lori Gilbert Kaye , but he fired at him as he fled in his car.  The “good guy with a gun” part of this tragedy should be headlined, not buried in final paragraphs of a news report.

Jewish institutions have made more recent investments in security, whether private armed guards, CCTV and volunteer lookouts, said Jerry Silverman, the president of the Jewish Federations of North America.  The same is true with other faiths as well.  Russell Moore, the president of the Ethics and Religious Liberty Commission of the Southern Baptist Convention said “Every religious group feels vulnerable right now as the violence feels unpredictable and chaotic,” he said. “We can disagree about all sorts of important things, even ultimate things, but surely every person ought to agree that no one should be gunned down in worship.”

The field of emotional trauma runs from anger to frustration to fear about personal and family safety.  Who wants to look over their shoulder as they worship? As a culture we are afraid of the bad guys intent to harm, but we should also be very afraid of politicians working overtime to make sure we can’t protect ourselves should terror greet us at home, in school or when we pray.

On their website, the Faith Based Security Network said “When the New Zealand thug killed so many defenseless Muslims, we knew there would be impressionable reprobates acting at both extremes. Sure enough, a band of rebel pigs in Sri Lanka acted in revenge and the Poway punk followed the lead of the New Zealand degenerate. That is the legacy of a killer. Their actions bring brainless worms out of the ground.”

GOC believes these brainless worms are members of one club, and it isn’t the white club, or the black club, or the right club or left club – it’s the evil club.  That’s it.