A “Minister of Gun Violence Prevention?” 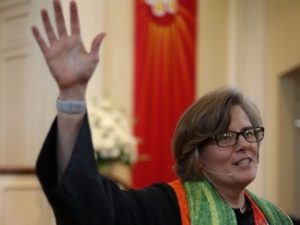 Rev. Deanna Hollas is based at Westminster Presbyterian Church in Dallas, Texas.

“Are you kidding me?” was pretty much the standard response (some were a bit more colorful) when told that a church just ordained a woman pastor to specifically work with a bunch of gun violence prevention advocates (otherwise known as the anti-gun crowd).

Yeah – our poll was decidedly unscientific, but the eyerolls and head shakes were involuntary. Don’t they have better things to do?  Why not actually get at the heart of the problem (which is the person) rather than the object (which is the gun)?  Because no one wants to talk about it, that’s why.  It’s just too uncomfortable to delve into the truth about what gets someone to walk down such a destructive path in life.

Why not ordain a “Minister of Messed-Up Families?” Now that’s a hot topic few want to touch, but it’s one of the most significant forces behind the trip into crime.

Dr. Steve Perry, the founder and principal of a highly successful magnet school says fatherless boys getting into gang activity is a big problem.  He says it is “likely connected to the anger young boys feel due to not having a dad present. What so many of us see who work with children are a bunch of angry little boys. They’re pissed…Every kid I’ve ever worked with who’s been in a gang said they joined a gang for one reason. It’s not protection. It’s love.”

Taking this a step further, it’s worthy to note that of the 25 most-cited school shooters since Columbine, 75 percent were reared in broken homes. Again – this is an issue swept under the rug because it sounds so, ouch – judgmental.  Even though every one of us knows good, solid single parents – the truth is, it’s more difficult raising kids solo and it’s fraught with more problems.

Dr. Peter Langman, a psychologist and respected authority on the issue of school shooters, found that the broken home theory is accurate.  Most came from homes with a wide history of harmful dysfunction which included criminal behaviors such as substance and child abuse, domestic violence as well as other factors such as infidelity, separation and divorce.

…this can lead to “getting a gun to suddenly have power.” ~ Peter Langman

After the tragedy at Sandy Hook, debate raged – and justifiably so.  Senior Fellow (and son of a single mother) of the Institute for Family Studies, Brad Wilcox, pointed to research by Michael Gottfredson and Travis Hirschi, which revealed how an absent father can be one of the “most powerful predictors of crimes .” He reported that fathers are role models, and establishing authority and discipline in the home is critical in the development of self-control and empathy towards others.  The left might consider this an example of “toxic masculinity” but we call this plain old smarts, and obvious ones at that.

Langman echoes this, noting that many of the school shooters struggled with what he calls a sense of “damaged masculinity” which in turn developed into an attitude that was “ultramasculine.” Langman poignantly says that this can lead to “getting a gun to suddenly have power.”

Why won’t churches and community organizations set their sights on how to shape behavior before a gun even enters the picture (as if it could just walk up and make itself available)?

If the Texas Grace Presbytery wants to ordain special anti-gun ministers and spend their time singing hymns proclaiming “If We Just Talk of Thoughts and Prayers.” that’s their prerogative as Americans.  Too bad few lives will be saved in the process.