Things have to be really dreadful to long for the sunny days of Jerry Brown, yet that’s what a lot of Californians are doing.  Whether it was his schizophrenic actions on the 2nd Amendment or occasional fiscal prudence, GOC always knew that Brown was going to look like a choir boy next to Gavin Newsom.

Newsom is sure no choir boy – his contempt for anyone and anything to the right of center has been clear from the moment he took the oath as Governor.  He not only wants to personally dismantle the 2nd Amendment but he also wants to take down President Trump – making a big deal this week by signing a bill (Senate Bill 27) that mandates presidential and gubernatorial candidates disclose income tax returns in order to appear on California’s primary ballot. Given that 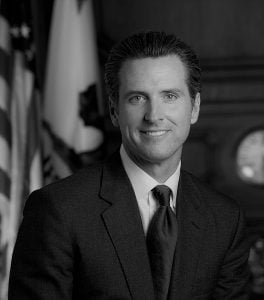 Trump has refused to release his taxes, the intent of the bill has been outrageously transparent from the outset.  In his signing statement, Newsom’s self-righteous call that states have a “moral duty to do everything in their power to ensure leaders seeking the highest offices meet minimal standards, and to restore public confidence” is laughable.  Such virtuous superiority coming from the guy whose career was bankrolled by oil tycoons and has had his own share of, shall we say “indiscretions…” is embarrassing.

The same bill came before Jerry Brown in 2017, which he vetoed.  He cautioned about the reality of a “slippery slope”, that the legislation did not meet constitutional muster and therefore would be open to a court challenge.  His veto message said “Today we require tax returns, but what would be next…Five years of health records? A certified birth certificate? High school report cards? And will these requirements vary depending on which political party is in power? A qualified candidate’s ability to appear on the ballot is fundamental to our democratic system.”

Newsom also spouted more of his “moral” indignation this week with some profane statements about the Gilroy shooting.  Never one to let someone else’s tragedy go to waste, he decided to nail this on the President as well, saying that Trump failed to take on the “machismo” culture perpetuating mass shootings.  “What’s goddamned absent in this country right now is moral authority,” he said, also blaming Republicans and groups like GOC for trying to eliminate gun-control policies in states like California.  DAMN STRAIGHT that’s what we are trying to do.

Newsom wasn’t finished: “California’s doing its part, but Jesus, these guys, the folks in the White House have been supporting the kinds of policies that roll back the work that we’re doing…it keeps happening, over and over and over again, on their damned watch.” Whose watch? Are you kidding?

Never mind that gun control has been an abject failure, and people are paying with their lives as proof.  The Gilroy murders had nothing to do with Trump or anyone else in Washington DC.  It was a California-established target-rich environment – a “gun free zone” – and the perpetrator cut through a fence to avoid metal detectors.  It’s sheer lunacy to think a piece of legislation was ever going to stop this monster.

Newsom ended his sanctimonious tirade with “You have a right to bear arms but not weapons of goddamned mass destruction – you need these damn things for hunting? Give me a break.”

Governor – you don’t want to go down the “needs” road with anyone.  We’re pretty darn sure there are a lot of “needs” in your life that the majority of Californians might think are downright unnecessary for a happy and productive life.