The Legislature has two more weeks before they break for the Interim Recess.  This means the members will return to their respective districts, and the Capitol halls will be quiet.  Staff will leave for vacations and for a good chunk of legislative offices, a sk 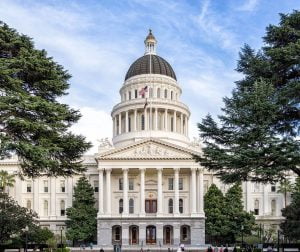 eleton crew of sorts will remain until the big bosses return in January.

But not yet.  The final days of session are long.  They are tiring.  It’s a petri dish of political shenanigans and the halls are clogged with lobbyists working their bills.  It’s also a lot of boring – interminable Caucuses where both Republicans and Democrats have lengthy confabs on how they should vote. So where does the 2nd Amendment rate in voting importance?

According to the Facebook page of the Assembly Republican Caucus,  featured issues pertain to Women’s Equality Day, the birthday of our Federal Park System, commute time in traffic, and Water Quality Month.  There were a few posts shared from outside sources on the bad business climate and a good one from the Caucus itself on some liberal crime bills.

On the other hand, the Assembly Democrats actually have a full website where they list positions on issues such as transportation, education, housing, health care, etc.  Nothing about crime, though. Certainly nothing about the 2nd Amendment.

At least the Senate Republicans have information on how to make California “Golden” again, one of which explained how to keep “Communities Safe” but zero about being able to Constitutionally protect our homes and families with um…a gun.  They did have a piece on cleaning up the APPS program, which is the closest thing to supporting the 2nd Amendment as we could find.

On their website, the Senate Democrats did post the ridiculous study that said red flag laws “may” work (see last week’s blog here which reveals evidence to the contrary), plus other hot issues such as ethnic studies and a wilderness park bill.

So how important is the 2nd Amendment to our elected leaders?

The pro-gun issue is well represented at the State Capitol – by GOC, and other pro-2A groups such as CRPA and the NRA.  GOC is far from silent and actually has been quite noisy for over 40 years.  Each group analyzes legislation and provides the results to legislators and their personal staffs.  We communicate with the committee staff who write the analysis – on both the Republican and Democrat sides (the ears of the Republican consultants are the most attentive by far).  We all have one-on-one meetings with legislators and their staffs, many of whom are embarrassingly ignorant on the Constitution.  Because we spend most of our time voicing opposition, we give cold, hard evidence as to why the policy will not work.  We deliver statistical data.  We send letters to every member of every committee prior to every single hearing.  We have even provided detailed questions to members to ask in committee, which is a strategic maneuver specifically designed to open the door for more dialogue.  This is necessary to circumvent the blatant bias of the committee that places limits on how long we “crazy gun nuts” can testify.  This strategy is routinely ignored.

Doesn’t it make sense that those who campaign on the importance of the 2nd Amendment – so they may score points with their “base” – reach out from time to time to see how they could help in such a hostile environment?

GOC can count on ONE HAND those who have ever asked what they could do to help us protect the rights of hundreds of thousands of Californians.  Don’t get us wrong here – there are some terrific members who are excellent votes in both the Senate and the Assembly.  But two years ago we had to change our grading system because we think no one should be rewarded with an A just for voting correctly.  We need them to speak up.  We need them to coordinate with us.  They need to put their time and money where their mouths are.

There are roughly 14 God-awful bills that are still moving through the legislative process (click here to read) and Governor Newsom is eager slap his signature on each and every one.  Be assured that GOC and our 2nd Amendment partners will fight tooth and nail against these bills until the gavel is dropped in adjournment next month.

We would love to hear from our friends in the Legislature how they could help us beat this crap back.  And you might consider asking YOUR elected official (click here to find your rep) what they are doing to assist in the battle for our liberties.