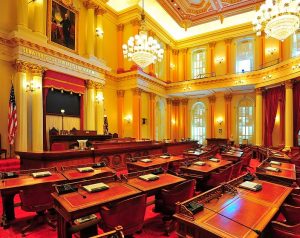 The California Legislative leadership doesn’t give a rat’s you-know-what about Californians, that is unless you want to get out of prison early, are a felon and want to vote, or get your boxers in a bunch if you hear the word “gun.”  This is rough to say about a state that we still love, but the truth is, California cares infinitely more about those who seek to do us harm than anything that would protect us (law enforcement, a firearm, etc) from harm.

Put simply, the state has given us the “golden finger.” Read how:

The legislature doesn’t think gun owners deserve due process even though it’s afforded to every other living American.  If you are an “alleged” rapist with a rap sheet a mile long, due process is your faithful, Constitutional friend.  But not for us.  With a click here and a phone call there, you can have your guns seized and there’s not a thing you can do about it with the passage of AB 61 (Ting-D).  Gun Violence Restraining Orders have now been expanded beyond family members to include employers and coworkers.

Being scared to death of law abiding folks having guns, but not being frightened to let some really bad dudes out of prison makes zero sense.  Whining about the dangers of plastic straws yet prohibiting schools from expelling defiant and potentially dangerous students is insane.

We are too reckless to be entrusted with the purchase of more than one gun a month.  That’s right – Democrat Senator Portantino is closer than ever to getting his wish to restrict what the law abiding can purchase with his SB 61. Like this is going to stop one gang banger from shooting another one of his criminal rivals.

We can’t be trusted at a gun show.  Pushing the dishonest narrative that gun shows are a bed-full of badness, the Legislature passed AB 893 (Gloria-D) to prohibit Crossroads of the West from holding their annual show at the Del Mar State Fairgrounds.  Truth be damned – gun shows are famously non-violent and bad guys don’t buy guns there.  Good guys go to gun shows.  Bad guys go to the sleezy bar at the edge of town to get a gun.

We gun owners need to cough up more money.  Making us pay extra for a CCW license as required by AB 1297 (McCarty-D) is supposedly going to stop the bad guys from shooting people.  The people who pass this junk are not only small minded, but they are uniquely punitive to the law abiding.

They’ve got this “bad guy – good guy” thing all wrong. Being scared to death of law abiding folks having guns, but not being frightened to let some really bad dudes out of prison makes zero sense.  Whining about the dangers of plastic straws yet prohibiting schools from expelling defiant and potentially dangerous students is insane.   We’ve said it before and we’ll say it again – the elevators are clearly not getting to the top floor in most legislative offices.

Will Governor Newsom sign these bad boys? He could have a bizarre attack of conscience or sensibility and veto them but in all seriousness, that would be some pure science fiction.

When Barack Obama decrees that you can buy a machine gun on the internet (yes, he really did say that), and the media gullibly nods, the message is that any politician can say anything they want about guns – no matter how outlandish – without being challenged. The Left knows the media will give them unlimited cover when it comes to mocking the 2nd Amendment – so can we trust one word they say when it comes to guns?  NO.