Hunters in California have endured one sucker punch after another.  The sad reality is that in 2019, the number of hunters in the Golden State decreased by 17 percent.  The American Hunter’s J. Scott O 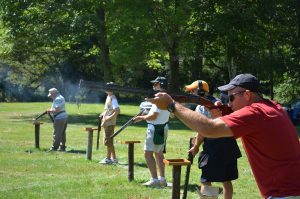 lmsted  recently reported that the new restrictions on the purchase of ammunition have been a blow to hunters and that’s on top of the initial wallop that banned lead ammunition, first only in condor country and then the entire state (irrespective of the dubious research that drove the policy.)

Olmsted writes “California is America’s most populous state. More than 39 million call it home, but hunters represent less than one-half of 1 percent of its huge population. As recently as 10 years ago, only 287,229 licenses were sold there. The total has fallen every year since. As of Oct. 31, 2019, the California Department of Fish and Wildlife reported only 224,604 hunting licenses sold compared to 269,276 a year prior.”

The Leftists who run the joint in Sacramento – and quite frankly the anti-gun crowd as a whole – are really big on declaring they aren’t against “shooting sports” or “hunting” per se.  This is a big fat lie.  They say they just want to keep guns from those who “shouldn’t” have them, but when it comes down to it, we all know this includes the law abiding.  Guns (not people) are evil and anything that fires a projectile must go.

Case in point:  proponents of the ban on lead ammunition and those who support registration have consistently tried to

make the point that the prohibition on lead won’t disrupt anyone’s hunting or shooting – that the non-lead ammunition is readily available.  This is patently false.   The truth is that less than 25% of the ammo available to hunters is non-lead.  The only exception is for shotgun ammo – used for the hunting of waterfowl and which is far more available than rifle ammunition.  No wonder so many hunters have eschewed hunting in California.  They must now find legal bullets at a significantly higher cost and according to some, not nearly as effective in the field.  Thus, many outdoorsmen/women are taking their love of the sport to states where the heritage of hunting is still alive, well and respected.

The numbers don’t lie – a whopping 44,672 hunters said adios to the California fields last year. The side issue is the significant hit to state coffers. No ammo means no hunting which means no tags.

The bottom line is that we must be very wary when any Leftist tries to explain their support of the shooting sports and that they aren’t hostile to the hunting community – any so-called “support” is disingenuous at best. This has become even more apparent given that Democrat Assemblyman Kevin Mullin just introduced AB 3071 which would ban lead ammo at the range.  As currently written, the bill would prohibit sport shooting ranges – outdoor and indoor – from selling or giving away ammunition unless it’s been certified as nonlead. The bill would also prohibit range patrons or employees from firing ammunition unless it is nonlead certified.  Not only would this be exceedingly detrimental to shooters honing their skills, but it would also have an adverse impact on the ability of the range to actually stay in business.   An intellectual drought may be the best way to describe the Left’s understanding of simple economics.

Mullin may not get economic theory and maybe he’s in cahoots with the condor community.  Who knows.  What we do know, however is this is another attempt to restrict the ability of the law abiding to acquire – and use a perfectly legal product that happens to be protected by the Constitution.

We must remember that although it won’t help with the specifics of the lead ammunition issue, we are eagerly awaiting the ruling by Judge Roger Benitez on the lawsuit that seeks to overturn the entire ammo law (Rhode v. Becerra).  A positive decision could lift the current restrictions on how, what and when we can purchase ammunition.

Sad to say, but Assemblyman Mullin isn’t the only one who has introduced a bonehead bill – there are plenty of other inane ideas that have made their way into a piece of legislation this year.  It’s 2020, and GOC is ready to once again, jump into the anti-gun minefield that has become California.