Since when does being frightened make one stupid?

Could people new to gun ownership hold the key to booting anti-2A politicians from office? 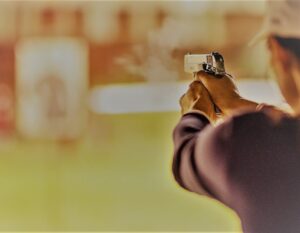 Maybe.  If we play our cards right.

According to the National Instant Background Check System (NICS), April’s surge in background checks of 2,911,128 followed a blockbuster number in March, which totaled over 3,740,688 – the most checks conducted in any single month since the beginning of NICS.  An awful lot of “progressive” anti-gunners got their chonies in a bunch when they heard this.

Rolling Stone lamented that “A Legacy of Covid-19 Will Be That Even More Americans Own Guns.”  We aren’t exactly sure about the “legacy” bit, but at very least, it’s a positive.  Headlines across California and the nation screamed “Gun Sales Surging Across the US”, and “As Pandemic Grows, Gun Sales Surging in Many States” – and “Coronavirus Has Inspired a Run on Guns in LA…”

This indeed, may be the silver lining in a pandemic that has left thousands dead and millions on the verge of financial ruin.  That said, it would be criminal to ignore this vital new population.

In a Washington Free Beacon article, writer Stephen Gutowski reported that Californian Scott Kane, who had never even touched a gun until the pandemic hit, made a decision to buy one.  He previously supported various gun control measures yet became “frustrated by the arduous process that has denied his family a sense of security. The pandemic has made the soft-spoken software engineer an unlikely Second Amendment supporter.”

Kane told the Washington Free Beacon “This has taken me, a law-abiding citizen with nary an unpaid parking ticket to my name, over a month…Meanwhile Joe Bad Guy has probably purchased several fully automatic AK-47s out of the back of an El Camino in a shady part of town with zero background checks.”

Ah – like cream in fresh milk, common sense has risen to the top.

The Rolling Stone piece described a how John from Indianapolis wanted to make sure he could protect his family so he decided to buy a gun following the Indiana governor’s shelter in place order.  He and his wife faced heavy crowds at a local store, but stood through the long lines to ultimately complete a background check and make their purchase.  “It was surreal to see so many people in the shop at once, just buying whatever guns they could get their hands on,” John said. “We saw a guy who clearly raided a piggy bank paying for a gun with coins.”

Given the decisions made by self-appointed tyrants at every level of government, it shouldn’t surprise anyone that this is happening.  People want to protect themselves and those they love.  It’s as simple as that.

But Chelsea Parson, VP of gun violence prevention at the Leftist think tank Center for American Progress responded in Rolling Stone that these new gun owners add a “risky” element to our already uncertain circumstances.  “What really has me concerned,” she says, “is that people who are choosing to buy guns right now, particularly people who are first-time gun buyers, are making that decision from a place of anxiety and fear.”

Thank you, Captain Obvious.  Since when does being frightened make one stupid?  Fear is an extremely positive motivator – fear of a home invasion might encourage someone to buy a home security system.  Fear of a heart attack might move someone to make better lifestyle choices.  Fear of failing a test might create better study habits.  Making the decision to buy a gun because one is fearful is not only reasonable, it is smart.

A lot of people who had been indifferent on the 2nd Amendment have done a 180 since we’ve been under a national quarantine. What an opportunity to educate an entirely new and significant population! That means we mustn’t be hesitant to speak up on the huge political value of supporting gun rights. Volunteer to take someone to the range.  Provide resources on safety. Being silent is what’s dangerous.

Gutowski says “An influx of new gun owners has the potential to permanently alter the politics surrounding guns in the United States…If the experience changes their minds about the ongoing debate over gun control it could tip the balance of political power toward pro-gun activists and politicians.”