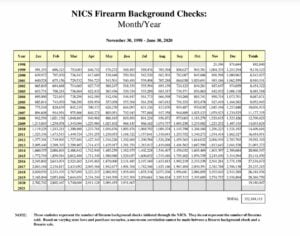 “The FBI recorded its highest-ever number of background checks for gun sales in June, a 70% jump over June 2019 and the latest evidence that more guns will be sold in 2020 than ever in American history.”  Washington Examiner – July 2, 2020

This must have a lot of Leftists popping a cork.  And we’re not talking some bubbly.

Anyone asking why the increase is so enormous pretty much divulges they’ve been living in a hole for the past few months – and a deep one at that.

What a difference a few weeks makes.

As we reported in May, Rolling Stone had lamented that “A Legacy of Covid-19 Will Be That Even More Americans Own Guns.”  Other progressive publications followed suit with their hand-wringing about reactions to both economic and viral uncertainties.  But then a sleeping giant was awakened: protests erupted across the nation, peaceful communities were violated and suddenly people weren’t so sure about being safe in their own homes, nor were they certain the police would be there to help should need arise.

According to FBI data, in 2020 alone, there have been 19,180,047 NICS checks, and as reported in the Washington Examiner, this will be the year that more Americans will buy more guns that any other period in our history.  This is stunning, and yet some in the media continue to call the run on guns “madness.”

Most gun stores can’t keep up with the demand – there are shortages of nearly every type of defensive firearm, whether a handgun, shotgun or rifle.  Classes required prior to securing a concealed carry permit are also seeing a huge increase in attendance.

What GOC described in May about American’s heightened level of concern for the safety of their families is even more true today than it was then:  “Given the decisions made by self-appointed tyrants at every level of government, it shouldn’t surprise anyone that this [increase in gun sales] is happening.  People want to protect themselves and those they love.  It’s as simple as that.”

What the Left ignores is that fear and concern can be very positive motivators.  This is in sharp contrast to the media’s drum-beat that buying a gun is nothing but a foolish and kneejerk response to a simple culture shift.  That being said, however, it is the absolute responsibility of every gun owner to insure they are well-trained in the safe handling of any firearm they possess.

For those new to the gun owning community, we welcome you with open arms.  We have information to share with you – on the laws that govern firearms and especially on safety.  GOC can help – contact us at  goc@gunownersca.com