If anyone doubts the magnitude of the 2020 elections, the following article might be a needed jolt to wake up. Why?  Because it is undisputed:  we are in the battle of our lives for our rights.

The 2020 election is fast approaching, amid choruses of the old cliché about this being the “most important election in our lifetime.” But this time, the evidence is impossible to ignore. If Democrats catch any sort of tailwind on Tuesday, Nove 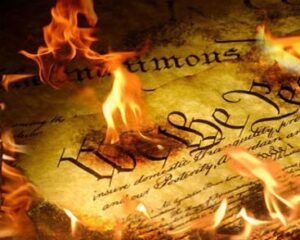 mber 3, the three branches of government will be at risk and the stage set for all-out destruction of the Second Amendment.

Of course, all over the country there are Democrats and people from every party who cherish and respect the Second Amendment. The point remains, however, that at the federal level the agenda of national Democrats is to annihilate the right to keep and bear arms.

Joe Biden has made his intentions clear. If elected, he will push for:

If there’s any doubt that Sleepy Joe has the energy to accomplish all of this, he has promised to appoint 47-year-old Beto O’Rourke as his “Gun Czar.”

But Biden would need more players on his team to be able to destroy the great work of the Founding Fathers. Most importantly, he needs the United Stated Senate to be led by Chuck Schumer.

Currently, Republicans hold a slight edge, 53-47, in addition to a tiebreaker in Vice President Mike Pence. How tenuous is the majority? Virtually all national election experts and pollsters agree that there are seven senate seats in either the “tossup” column or likely to switch parties.

There is no doubt that, as Majority Leader, Chuck Schumer would tear up the Senate rulebook and get rid of the filibuster.

This little piece of arcane parliamentary procedure is a powerful protection of the rights of the minority party in the Senate by requiring a super majority to pass any controversial legislation.

By way of contrast, the U.S. House is run by majority rule. So, by definition, the majority party can pretty much do whatever it wants, as long as most of its members agree. For many years, pro-gun Democrats helped to keep that party in check when it came to gun rights, but those days are long gone.

We know this for sure because on February 27 this year, the House passed H.R. 8, a Universal Background Check bill, with only TWO Democrats voting in opposition. Suffice it to say, a Democrat majority in the House can pass just about anything Nancy Pelosi wants.

Which brings us back to that funny little word, filibuster.

By requiring a super majority of sixty votes to pass legislation, this rule was designed to slow down the torrent of legislation that can come from the majority party in the House.

Or, as George Washington is said to have told Thomas Jefferson, “We pour our legislation into the senatorial saucer to cool it.”

Under Schumer, the saucer will be smashed into a million pieces, and the Senate will be run just like the House. The Biden gun control agenda will have a green light to get through the Congress.

Furthermore, a Democrat majority will be able to alter the playing field and make it difficult for Republicans to ever take back that chamber.

At that point, the road to victory for Senate Republicans, or any other party, will be steep indeed.

We have already touched on how easy it is for the majority party to work its will in the U.S. House.

No legislation even gets to the floor for a vote unless it is blessed by the Speaker, and the current Speaker (not to mention those waiting in the wings to replace her) will push to ban guns.

In addition to passing H.R. 8, much of Pelosi’s anti-gun agenda is laid out in H.R. 5717, euphemistically named the “Gun Violence Prevention and Community Safety Act of 2020.”

This is an anti-gun wish list that, for the most part, mirrors Sleepy Joe’s Second Amendment destruction plan.

Make no mistake. If the triumvirate of Biden-Pelosi-Schumer are in control, H.R. 5717 might be considered a warmup act for the damage to come.

SCOTUS and the Second Amendment

Last, but far from least, is the third, coequal branch of government.

On the judiciary to date, more than two hundred judges nominated by President Trump have been confirmed. On the whole, these judges have been more pro-gun than those appointed by the President’s Republican predecessors.

But there is more work to do, particularly at the top.

We recently ran a three-part series on the danger looming for the Second Amendment at the Supreme Court. For the past decade, the Court has neglected the Second Amendment and therefore allowed the lower courts to, according to Justice Clarence Thomas, “[yield] analyses that are entirely inconsistent with Heller.”

Even though five of the nine Justices on the Court were appointed by Republicans, the Second Amendment is slowly being eroded because the High Court refuses to hear any cases that would provide guidance to lower courts on Heller (which recognized the Second Amendment is a right held by individuals, and not a state militia) and McDonald (which incorporated the right to the states).

GOA is reviewing firearms-related decisions by virtually every nominee likely to be selected by President Trump for the Supreme Court in order to sound the alarm against any anti-Second Amendment jurist.

However, if Biden wins, he will follow in the footsteps of Obama and nominate activist justices who would leap at the chance to rewrite Heller and McDonald, and rubber stamp whatever comes out of an anti-gun Congress.

Is this “the most important election in our lifetimes?” Could this really be “Armageddon” for gun rights? Let the reader decide.

But Second Amendment supporters must go into this election informed and with open eyes. Register to vote, and make sure the millions of new gun owners are also registered. The stakes are simply too high for even a single gun owner to sit this one out.

**This piece was slightly edited for size.  To read the full article, click here.