For all the Left-wing and media squawking that there’s no such thing as voter fraud, there’s sure a lot of evidence that proves otherwise.

It took all of five minutes of clicking to find significant examples of mucked up voting – and big surprise, a lot of the criminal shenanigans come from battleground states that could ultimately impact the election.  None of this jives with the media’s liberal – and generally lazy narrative that all is blue skies and rainbows in the voting world.  But some things are too tough to ig 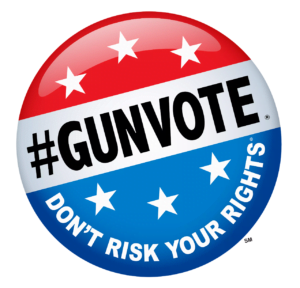 nore.  Even the New York Post couldn’t deny what’s going on. They recently reported that a high-level Democrat operative admitted voter fraud is rampant, pointing out that mail-in ballots are particularly vulnerable, and that he had been engaged in vote manipulation “on a grand scale, for decades.”

According to this particular operative, “An election that is swayed by 500 votes, 1,000 votes — it can make a difference.  It could be enough to flip states.”

The Post confirmed the whistleblower’s identity and history as a campaign consultant, and that he not only “changed ballots himself over the years, but led teams of fraudsters and mentored at least 20 operatives in New Jersey, New York and Pennsylvania — a critical 2020 swing state.”

This is frightening stuff.

Just this week in Virginia, election officials have expressed deep concern with being able to accurately tabulate votes.  They fear – justifiably so – that ballots may have been permanently lost after thefts have occurred at six different post offices throughout the state.

Yet another story chock full of shocking revelations comes from Minnesota, where it was recently uncovered that voter fraud is alive and well in the district of uber-leftist congresswoman, Ilhan Omar.  According to an investigation conducted by Project Veritas, Omar and her allies have allegedly “masterminded an illegal ballot-harvesting operation to exchange cash for votes in order to rig elections.” 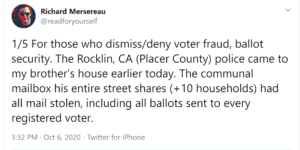 In this case, MSN News  – along with a host of other media, reported that a “ballot broker” openly boasted “about keeping hundreds of absentee ballots in his car trunk. He brags about them being filled in by people other than the voters. Often, money changes hands. Witnesses tie the rampant fraud to the campaign chairman of a prominent member of the radical “squad” in the U.S. House.”

The Minneapolis Police Department is currently conducting an investigation.

Law-and-order Texas is not immune to ballot issues, as the Left’s juggernaut toward flipping it blue continues: According to the Associated Press,  “In East Texas county commissioner and three other people have been indicted on charges that they fraudulently solicited mail-in votes from able-bodied voters by claiming they were disabled, often without the voters’ knowledge or consent.”  An investigation is ongoing and the South Texas Record reports the state has been “openly waging a legal battle…seeking to stop County Clerk Chris Hollins from sending millions of unsolicited mail-in ballot applications to registered voters.”

And then there’s that situation in toss-up Wisconsin where a bunch of absentee ballots were found among trays of mail that had been dumped in a roadside ditch. As reported by the Biz Pac Review, the police recovered three trays of mail found “adding to fears that a dramatic increase in mail-in balloting ahead of the November election will create nightmarish logistical problems and contested results.”

California may not be a battleground state, but we’ve literally busted the door open to fraud, especially given that ballot harvesting is perfectly legal (practice of allowing political operatives and others to collect voters’ ballots and turn them in en masse to polling stations).  Additionally, our voter rolls are full of people who have either moved or died.

Jarrett Stepman recently wrote in the Daily Signal that “California Wants Me to Vote, Even Though I Haven’t Lived There for Over 8 Years.”  He says “Since I left California in 2011, I have registered to vote in two other places. I’ve officially changed my address. And my parents notified election workers at their local voting location after I left the state, but to no avail.”  This alone is reason to give California a vote of “no confidence”.

According to Hans von Spakovsky, senior legal fellow in the Edwin Meese III Center for Legal and Judicial Studies “absentee ballots are the tools of choice of election fraudsters because they are voted outside the supervision of election officials, making it easier to steal, forge, or alter them, as well as to intimidate voters…Going entirely to by-mail elections would unwisely endanger the security and integrity of the election process, particularly if officials automatically mail absentee ballots to all registered voters without a signed, authenticated request from each voter.”

In Georgia, 1,000 voters face prosecution over casting multiple ballots, and a spokesperson for their Secretary of State commented “While the investigation is still ongoing, initial results show that of the partisan ballots at issue, approximately 58% were Democratic ballots.”

And if all this weren’t enough, NBC recently reported that 1 in 5 ballots have been rejected as fraudulent in a New Jersey mail-in election.  Their state Attorney General Gurbir S. Grewal recently announced he is charging four men with voter fraud – including the vice president of the City Council and a candidate for that body. Not only that, there have been allegations of voter intimidation and ballot theft.

This election could have grave consequences from the top of the ticket right down to our local city councils, and it’s vital that we have confidence – rather than doubt – in our votes being counted.  Abraham Lincoln once said that the ballot is stronger than the bullet, but for that to remain true, the process by which we select those who represent us must be conducted with the highest possible standard of ethics.

What can YOU do to make sure your vote for the 2nd Amendment is protected – and counted?  If you are not voting in person at a polling place or voting center, GOC strongly recommends that you take your completed ballot directly to a post office or to your polling place, which is noted on the back of the ballot envelope.  For additional information on voting in the upcoming election, go to https://action.gunvote.org/