Something smells in the Silicon Valley and it’s not the fish in the San Francisco Bay.  A pay-to-play scheme has been percolating in Santa Clara and it points to why sheriffs should not be able to decide who gets a concealed carry permit based upon “justifiable need.”  Just as one’s trash is another man’s treasure, so is it with CCWs.  My personal need would never be “justified” by the sheriff of LA County, for example. 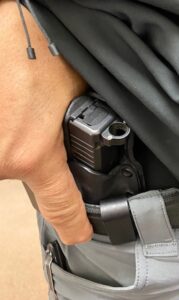 Santa Clara is so far out in the weeds with the CCW scandal that it’s likely some folks are going to be spending time in a cell.  The county’s District Attorney Jeff Rosen just announced even more charges and additional indictments are in the pipeline in his ever-evolving investigation into a quid-pro-quo situation involving CCW permits.  According to Palo Alto online, “Four people, including top brass in the Santa Clara County Sheriff’s Office, have been indicted in bribery schemes for donations to Sheriff Laurie Smith’s reelection campaign in exchange for highly coveted gun permits.”

And what exactly was on the table in exchange for a CCW?  Hefty dollars ($90,000 worth) for Smith’s reelection campaign coffers from an executive protection company, a donation by Apple of 200 iPads for the Sheriff’s office totaling over $70,000 and a promise of $6,000 for some snazzy, luxury box sporting event tickets.  Permit applications were allegedly held up until items of actual value were exchanged.  So far, the two-year bribery investigation has yielded 13 indictments with three people having plead guilty.

“Call this quid pro quo. Call it pay-to-play. Call it give to get. It is illegal and deeply erodes public confidence in the criminal justice system…when high-ranking members of a law enforcement agency are at the heart of a bribery scheme, it tarnishes the badge, the honor, the reputations and — tragically — the effectiveness of all law enforcement agencies,” Rosen said.

GOC has been hugely vocal in our support of those California constitutional sheriffs who believe the 2nd Amendment is an individual right that must be preserved, and thus grant permits on these grounds.

He’s right.  Even though very few sheriffs fall victim to the temptation of “pay-to-play” scenarios, the lure of having the power to decide who can carry a concealed firearm is strong.  That’s why the only criteria should be whether someone is a law-abiding citizen.  Period.  GOC has been hugely vocal in our support of those California constitutional sheriffs who believe the 2nd Amendment is an individual right that must be preserved, and thus grant permits on these grounds.

Of course, if the Legislature were to weigh in and remove California’s heavy restrictions on carrying, this wouldn’t be an issue, but given the makeup of the nuts in Sacramento, this is highly unlikely.  This matter will be left up to the courts (to read more about the Young v. Hawaii case, click here.)

There are roughly 20 million concealed carry permit holders in the USA – which includes a whopping 820,000 permittees added in 2019 alone and represents an increase of 34% from 2016 data.  And, funny enough – as permits (and gun ownership as a whole) have increased exponentially, both murder and violent crimes have decreased.  That being a fact, every obstacle that squelches our right to carry a concealed firearm should be given the boot – whether a sheriff, legislator or some bureaucrat.  The only granting authority should be the Constitution.