I heard the bells on Christmas Day
Their old, familiar carols play,
and wild and sweet,
The words repeat
Of peace on earth, good-will to men!

‘I Heard the Bells on Christmas Day” may not be one of the more popular holiday carols, but it could very well be a theme song for 2020.  Written during the Civil War, Henry Wadsworth Longfellow’s song tells the story of an anguished time in our nation’s history – of cannons thundering in the South: 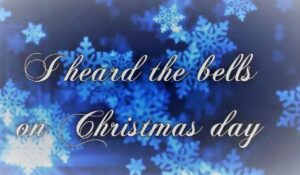 as if an earthquake rent,
The hearth-stones of a continent,
And made forlorn
The households born
Of peace on earth, good-will to men!

Peace on earth.  We may not be warring with other counties yet there doesn’t seem to be a lot of peace in the USA as we begin the task of closing out one of the most challenging years imaginable.  Who would have thought at this time last year what 2020 would bring? A pandemic, riots, hateful voices, election fraud – why not bow our heads and buy into the belief there is no peace on earth? Even our presumptive president just declared that our darkest days are ahead of us.

“For hate is strong, And mocks the song, Of peace on earth, good-will to men!”

This is true.  Not debatable.  Hate is strong – and it mocks the joyous conviction of “peace on earth…”

But this is not the end of the song, which was penned as Longfellow grieved the death of his beloved wife and the critical wounding of his son as the North and South engaged in bloody battles.  His wife, with whom he had six children, tragically died when a fire consumed her as she sealed envelopes with hot wax, and his son was gravely injured serving as a 2nd Lieutenant in the war.  Left alone to nurse his dying son back to health and to father his brood of children, he did what he did best – wrote words which should penetrate even the most hardened heart:

Then pealed the bells more loud and deep:
“God is not dead, nor doth He sleep;
The Wrong shall fail,
The Right prevail,
With peace on earth, good-will to men.”

These timeless words were born out of circumstances so painful, it’s difficult to imagine, yet the ultimate message of hope is where we must place our trust.  We are a nation divided and angry – and although there are plenty of reasons for discord and wrath, we must remember that our ultimate foes are omnipresent doubt, distrust and division.   Although a nation united may seem unattainable, GOC is choosing to view our circumstances differently.

We will hold fast onto our core belief that “the wrong shall fail, the right prevail,” and peace will truly rule the earth, and pray you do as well.