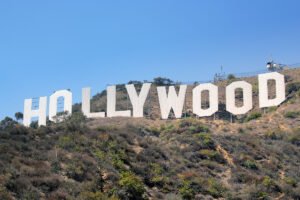 Why would anyone want to woo Hollywood into fixing a problem they know nothing about?

But gun violence!  They know about that, right?

Evidently, gun violence needs a savior and Hollywood fits the bill.  It doesn’t matter that pistol-packin’ shoot-em-ups bring in a lot of cash, because celebrities continue their pearl clutchin’ about the evils of things that go boom.  Glitz, glamor and boatloads of money don’t translate to policy knowledge.

Former U.S. Rep. Gabby Giffords (D-Ariz.) recently made it clear her eyes are on the “Hollywood elites” to use their public platforms to drive gun control policy.  She told Variety magazine recently that “police violence is gun violence” and then went on to say that “that few industries play a larger role in shaping culture than the entertainment industry.” Well, that may be frightening, but it’s also true.

Hollywood A-listers are not only notoriously left-leaning but they are ridiculously tone-deaf.  Their inability to identify with run-of-the-mill Americans is glaring.  Recently, a bunch took to the internet to muse on the coronavirus isolation.  Problem is, they did it from “every day” locations such as a plane to Paris (Gwyneth Paltrow), a marble bathtub filled with rose petals (thank you Madonna), a $590 million super-yacht cruising the Caribbean (David Geffen) or a private, full size basketball court (Drake) to name a few.  They got a well-deserved spanking for it, too.

Celebrities live in an environment that purposefully isolates most of them from, well, people like us. Having the ability to employ armed guards and live in gated mansions in exclusive communities, however,  doesn’t mean they are qualified to make policy decisions at the local, state or federal level – especially with respect to the 2nd Amendment.   Realistically speaking, the majority of the glitterati couldn’t find their way to the Constitution if it were glued to their foreheads.  Still, Giffords thinks these luminaries have something to offer, saying “Hollywood and the arts are vitally important to helping us through a period of isolation, bitterness and divisiveness.” In contrast, we remember when celebrities made news when they funneled money to bail out the violent malcontents who rioted, looted, burned and destroyed entire communities to the tune of over a billion dollars last summer.  What’s worse, this was at the urging of the most anti-gun presidential candidate ever – our current Vice President, Kamala Harris.

Anyone who believes that the entertainment industry has society’s best interests at heart is a few fries short of a Happy Meal, but then again, the Left buys their virtue signaling and can’t resist the pull of the red carpet.  Most people truly have no issue with the wealth or notoriety that comes from the big screen – heck, we all have spent time in tacit support of their “art” as we’ve binged on Netflix, especially during COVID.  That said, Hollywood’s voice should never be considered more valuable or more intelligent than those of us who grasp the extraordinary significance of the 2nd Amendment and it’s guarantee of protection against the dangers of a broken world.