In a world that is profoundly awash in weakness and fragility, losing an icon of strength is particularly painful.

I had the pleasure of meeting Rush Limbaugh on several occasions back in the days when his radio audience was limited to the Sacramento area – political events, a wedding – and he also served as the MC for an event that featured my father, the late Senator H.L. Richardson, founder of both Gun Owners of California and Gun Owners of America.  I recall Rush as magnetic.  And funny.  Authentically unconventional.

I’ve listened to Rush for as long as he’s been on the air, and I knew the day was coming when his voice would be silenced and I grieved in advance of his passing.  I also saw the ugly ghouls who rejoiced in his impending fate, and yes, they continue their vile commentary today.  I want to ask what in God’s name is wrong with these people that are filled with such 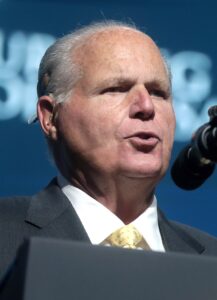 depravity, yet I would rather ask, what was right about Rush?  That is the greater and more important story here.

The things that were right about Rush are innumerable.  He was a patriot of the most extraordinary means.  He celebrated American exceptionalism, but not as a “we’re better than you” type posture, but as an exclamation as to what people can do when unfettered and free. He was kind.  He was generous.  He was bold in a field of timidity.  He was unafraid of those who didn’t like him and routinely broadcast and laughed their absurd revelations.  He never held up his finger to see which way the wind was blowing – because he understood the basics of right from wrong.  And regardless of the slings and arrows he faced from the Left and the Right, he always stood his ground with assurance.  And for those few times he was wrong, he admitted it.  He never cowered under the blame of someone else, which in my opinion, is one of the hallmarks of real manhood.

I can draw a lot of similarities between Rush and my Dad – both fierce defenders of the 2nd Amendment and outspoken conservatives who believed our country was worth fighting for – neither willing to sit silently and let it slip into the pit of socialism.  My dad was considered a major player in California politics, even though he was a Republican in a sea of liberal Democrats.  It’s been said that he “single-handedly changed the nature of the Capitol, pioneered political techniques that continue to be used and altered the course of California history…few political figures past or present could claim to have had such impact.”

And Rush singlehandedly changed the face of national politics in the most magnificent and unmatched way – using his wit, humor and cosmic intelligence to unapologetically play hardball in a sea of wimps.

Michael Harrison, founder and publisher of Talkers Trade magazine which covers talk-radio, said that Rush “was one of the most influential commercial broadcasters, if not the most influential, in American history.”  Harrison remarked that Limbaugh’s legacy – his impact on public policy, on the national culture and on GOP politicians from the presidency on down – remains unmatched.

“In the process he was a tremendous boost to the radio industry,” Harrison said. “Rush Limbaugh actually made radio… important and kept it influential as a public platform. All of us in the radio business owe a debt to Rush Limbaugh for making radio matter. You cannot avoid or ignore that truth.”

Because of the trailblazing that Rush did for conservative broadcasters, many will use their voices to fill the void and I wish them well.  That said, the golden microphone should forever be reserved for Rush Limbaugh.  Some shoes can never be filled.