If we didn’t know better, GOC would think that the old phrase “laws are like sausages – it’s better not to see them being made” was coined after watching the California Legislature in progress.  It’s dang unpleasant, and the biggest difference is that sausage is pretty yummy, but the laws we produce – not so much. 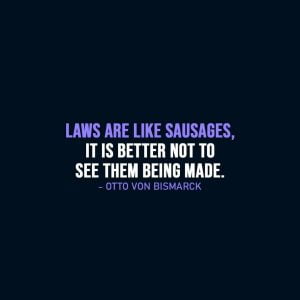 Most of the time, the legislative process is like watching paint dry on a cold day – there’s a lot of talking and not a whole lot of doing.  Politicians from both political parties love nothing better than hearing the sound of their own voices, and when a microphone is near, the draw is simply irresistible.  Sometimes, though, there are fireworks – it can be entertaining , but it can also be downright infuriating – the lies that flow from the lips of the Leftists who run the joint are mind-blowing.

Realistically speaking, though – this is important stuff. What our elected officials do under the dome in Sacramento has a very real impact on our daily lives, and one of the reasons so much garbage has been passed and ultimately put into law is because too many people just don’t pay attention.  We get that – most of us are too busy making a living to provide for our families to spend time listening to a bunch of elitist politicians drone on, but we must realize there’s a price to be paid for our inattention.  And that is our freedom.

This is one of the reasons that GOC is amping up our efforts to get you more involved in the process.  Being an informed voter is hugely important, but we want to take things further.  And with no apologies, we are going to encourage you to actually listen and/or watch legislative proceedings.  Yes, it takes time and sometimes nerves of steel (but we have that in spades, right?).  The bottom line is, we need more people to know about who makes the laws we must live with and how they make them.  Might you fall asleep?  Maybe.  Will your blood boil?  WE HOPE SO!  Believe it or not, but we can use the positive energy that comes from this kind of civic engagement.

It’s one thing to get information from GOC about the hostility we face at the Capitol, but it’s another thing altogether to see it in action.  We have been likened to child murderers, have been called disgusting and vile – that we have the blood of innocents on our hands.  It can get downright ugly sometimes.

Between now and when the Legislature adjourns in mid-September, there will be committee hearings and floor sessions in the Senate and the Assembly, where they will hear a host of bills geared to dismantle our 2nd Amendment rights.  Both the Senate and the Assembly  televise Floor Sessions and Capitol Committee Hearings, and on GOC’s website, you can follow the status of each bill we are tracking and when each bill is being heard.  We encourage you to watch, listen and then send us your comments.

In the coming weeks, we will also be launching an efficient and targeted means for you to communicate directly with legislators.  COVID has been a big obstacle in this process, but GOC has not let this stop us from advocating for the 2nd Amendment in the most antagonistic circumstances.  Our rights are worth it – and so are you.