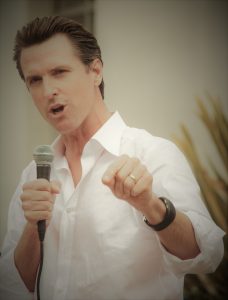 “What the hell’s wrong with us?” asked Governor Gavin Newsom in the wake of the shooting in Santa Clara last week.  Excellent question, Governor.

There’s a lot to agree with here – but the irony is hard to ignore given that this came straight from Newsom himself.  Like all of us, we’re sure he feels the painful burn of yet another shooting and yes, we agree 100% that we need to put down our arms when it comes to politics, stale rhetoric and finger-pointing.  He’s correct in that it absolutely produces a lot of fury and consternation – especially when the blame falls on the community of law-abiding gun owners, even though the evil deeds have been committed by monsters.  This reasonably builds resentment – and mistrust of the media and politicians alike.

Yet, Newsom believes that gun control in California “still works”. He tweeted “Some people like to point to horrific shootings like yesterday’s and say CA’s strict gun laws don’t work. The reality is that is simply not true.”

Sorry Governor – it IS true.  Not one of our laws – the ban on “assault weapons”, the 10-day waiting period, universal and ammo background checks, the limit on the number of guns one can buy monthly, red flag laws, etc, etc, etc. prevented the shooting.  According to AWR Hawkins who reports for Breitbart on 2nd Amendment issues, Newsom’s tweet “went back to 1933 and focused on the “rate” of gun deaths instead of the number of gun deaths…Pointing to the “death rate” allowed him [Newsom] to bypass mentioning that California gun control has not stopped the state from witnessing mass shooting after mass shooting during the last decade.”

But then Newsom heaped on the irony of his “what the hell” statement when just days following the Santa Clara tragedy, he announced that he granted 14 pardons, 13 commutations and 8 medical reprieves – for murderers, bank robbers, armed robbers, kidnappers, killers for hire, drivers of get-away-cars for murderers, and assaulters with firearms.

Not only that, but he also decided via executive order to increase “early release credits” for 76,000 inmates – many of whom are violent and repeat felons.

Indeed, “What the hell is wrong with us?”

“With little notice, California … is increasing early release credits for 76,000 inmates, including violent and repeat felons, as it further trims the population of what once was the nation’s largest state correctional system” reported AP in April.  “That includes nearly 20,000 inmates who are serving life sentences with the possibility of parole.”

In “reading through the 40 pages of pardons, clemencies, commutation and medical reprieves” the California Globe reported “there were many prison sentences that were “Three Strikes, You’re Out” sentence enhancements, a California law written to help deal with violent repeat offenders.”

Yeah, “What the hell’s wrong with us?”

And then there’s that nasty little issue so many don’t want to say out loud: the presence of evil.  In a sad commentary on the state of American culture, Townhall columnist Michael Anthony writes “It’s time Americans put aside the smoke and mirrors involved in attacking the 2nd Amendment and law-abiding gun owners, and instead embrace our need for a national conversation about the root of our problem: that America’s gun violence is not perpetrated by guns, but by the growing evil the average American seems to relish.”

Harsh words, but true.  Anthony goes on to say “We’ve become a society of hearing impaired people. We cannot hear the truth that is screaming at us. We celebrate the right to do anything we want, even if it’s evil to the core, thinking our consciences and hearts are bulletproof. In reality, they are incredibly moldable, being shaped before our very eyes. We wonder why our society reflects what’s happening in the lives of many?”