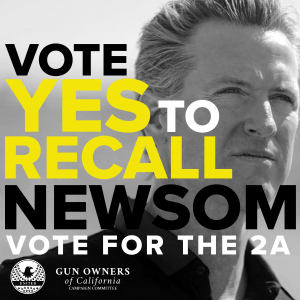 But the state is burning.  Crime has escalated and he’s still going after our guns. Gas and housing prices are on the rise. And people are worried. Given this sobering reality, when a reporter recently asked Newsom how could he “deliver the California dream to all Californians?” he responded with a raised voice:

“It would be damn nice if our homegrown team would be focusing on what’s right. Everybody outside this state is b****ing about this state because of our success, and I’m proud of it.”

Correction, Mr. Governor.  There are plenty of us inside California that are fed up. In an interview where he answered policy questions from several of California’s newspapers, Newsom was visibly annoyed and went on what some are calling an “unhinged rant”, swearing and slamming his hand on his desk no less than 59 times.

We must be getting to him.

Newsom may be proud of his accomplishments in California, but he makes the grand mistake that because Big Tech is doing well, he assumes it’s great for the rest of us.  His ignorance of what is happening outside the French Laundry and $350 plate dinners is blood-boiling.

He has actively worked to strip us of our ability to protect ourselves while he amped up early release credits for 76,000 inmates, 63,000 of which were convicted of violent crimes.  And with levels of crime intensifying, the hundreds of thousands of brand-new gun owners in California have faced long lines and a stifling bureaucracy that have stood directly in their path to being able to safeguard families and businesses.  Firearm retailers are struggling to keep guns on the shelves and the ammo shortage and Newsom’s registration fiasco have added to the seething of frustration amongst Californians.

GOC gets phone calls and emails every day from people all over the state who are more than aggravated – the last 18 months of pandemic uncertainty, lockdowns, rising crime and noisy defund the police movements have made hundreds of thousands of Californians realize that they are their own first line of defense.  And in the face of this “new normal” – politicians like Gavin Newsom are doubling down on their gun control roll.

Meanwhile, we see the Taliban going door-to-door in Afghanistan seizing privately held weapons.  And thankfully, while we may not live in a terrorist dictatorship – but good Lord – we must heed the danger ahead when those in power take steps to disarm citizens.  Let’s be real here – according to the Left, this is what they call “reasonable gun control.”

HAD ENOUGH?  WE HAVE.  Gun Owners of California Campaign Committee is urging a YES vote on the question to recall Governor Gavin Newsom.

UPDATE:  For those who requested recommendations on who we support to replace Newsom, note the following:

In our last two email blasts we have stated the following:

All “top tier” candidates were sent a detailed GOC questionnaire on the 2nd Amendment in mid-July. To date, none have been returned by our deadline, and therefore have received a “DID NOT RESPOND” grade. It is extremely disappointing that the 2nd Amendment is not a priority to so many candidates.