Gavin Newsom raging that the recall election is “not fair” is like a linebacker whining about a skinned knee.  For someone who treats the majority of Californians like we are a bunch of illiterate peasants, he should have thought about what’s “fair” before he and his unmasked buddies racked up a $15,000 dinner bill at an exclusive restaurant in uber-wealthy Napa.  Or before emoting that he was a “Zoom parent” even though his kids were learning in person at a pricey private school while public schools were shut down.  Or before he released a pack of felons onto our streets, all the while screaming that guns are somehow responsible for skyrocketing crime rates.  He should have thought about a lot of things.  What a snooty hypocrite. Didn’t yo 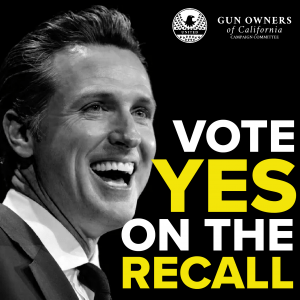 ur mom tell you that life’s not fair, Gavin? If you can’t stand the heat in the political kitchen, then get the heck out. The recall next Tuesday (September 14, 2021) is big news, and Gun Owners of California Campaign Committee (GOCCC) has received a significant number of phone calls and emails asking us which candidate we recommend to replace Newsom should Question # 1 be successful.  As we have reported, we are not making an endorsement, which has been GOCCC’s policy for decades in races where multiple candidates have been verified as having a strong record on the 2A.  As we have stated previously regarding Larry Elder, we contacted every top tier candidate in the Recall.  Mr. Elder was sent a questionnaire twice and we reached out to him on multiple occasions. Given the significance of the 2nd Amendment – especially here in California – GOCCC, and the 2A community at large would certainly like to hear from him personally on this matter.  Direct communication with candidates is vital to providing the most accurate information to our members, and we take this very seriously. Given the frenzy regarding who to support on Question #2, we can’t state clearly enough that a YES vote on Question #1 is where we must expend our efforts.  Of course, who to replace Newsom is important, but the biggest obstacle of all is getting that YES vote over 50%.  We have an unprecedented opportunity, and we mustn’t let the big bucks of Hollywood or the power of that negligent and pitiful White House drive election turnout.  Please make sure your friends and families cast their ballots for some new blood in Sacramento.  For further important information on the recall, check out “Why Does GOCCC Support the Newsom Recall”.