Meanwhile, the Left is Clutching Their Pearls

In just six months – from January to June of this year – over 3.2 million people became first-time gun owners.  This is the short answer as to why US retailers are having a tough time keeping their shelves stocked with handguns, long guns and ammo: the demand is so high, manufacturers are having to work overtime just to keep up.

A recent survey conducted by the National Shooting Sports Foundation (NSSF – the firearm industry trade association) found that a whopping 33.2 percent of customers – 3,247,351 individuals – purchased a gun for the first time.  These figures are based upon June’s total of nearly 9.8 million background checks for a gun sale, which, when added to the 21 million from 2020 is mind-blowing.  What’s more, this staggering trajectory shows no signs of slowing; the 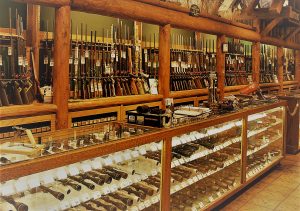 Left must be clutching their pearls at this news.

GOC knows firsthand about the demand – we field phone calls and emails daily from all over the state – people are taking control of their safety, rather than leaving it to a government they find unresponsive, and frankly – at odds with the concept of personal freedom.  While there is a palpable sense of urgency once someone decides to buy a gun, it is often matched with a strong – and significant – sense of responsibility.  We have found that most new gun owners have a desire to not only be armed, but to be informed as well, on everything from current laws to safety issues.

Jeff Charles is one such individual.  A freelance writer and political contributor, he’s the host of the popular “A Fresh Perspective” podcast and co-host of the Red + Black Show.  He recently live-streamed his decision to become a gun owner, stating that his journey was “filled with copious levels of research and consulting with friends.”

Charles says “But while I am excited about this step into a new world, purchasing the weapon was a sobering process. One of the reasons why I procrastinated was because a gun is something you buy hoping that you never need to use it. I don’t want to ever need my gun…”

He’s right on the money.

The Left believes that this “run on guns” is terrifying and driven by an unreasonable and growing paranoia stemming from lockdown anxiety and race-related civil unrest, which they say has literally pushed new gun owners out of the woodwork.  We know however, there is more to the story.  There is nothing paranoid about wanting to protect one’s home and family – especially when law enforcement is being forced to stand down.

“Even though I know that statistically, it is highly unlikely I will ever have to use it to defend my life or someone else’s, it is far better to have it and not need it than to need it and not have it” continued Charles. “But the other reality is that now, more than ever, many (not all) on the hard left wish to move the United States to a system that more resembles Australia than what the founding fathers intended.”

The firearm industry believes the skyrocketing number of new gun owners could be higher.  The “politically correct/cancel” culture of today is enough of a motivator for many to stay anonymous when surveyed.   Additionally, according to NSSF, “Newspapers have published names and addresses of concealed carry permit holders and politicians continually call for national gun registries. It is understandable that gun owners are reluctant to self-report the guns locked in their safes.”

The plain truth is that nobody ever wants to consider the possibility that they will be in a situation in which someone is trying to endanger their lives. It’s not exactly a pleasant thought, is it?
Jeff Charles

The bottom line is that owning a gun is a individual right for the law abiding that is guaranteed by our Constitution – and it doesn’t really matter whether it’s for personal safety, hunting or simply plinking a target.  This right does come with responsibilities however, and a consistent commitment to safety.  GOC strongly recommends all new gun owners tap into the extraordinary resources provided by NSSF.  They’ve created a comprehensive and thoughtful “road map” of firearm ownership that provides a host of helpful information on safety and training to facts sheets and their Project ChildSafe.  Check out their many resources HERE.

GOC also wants to be a source of information as well – we are open to questions on what it means to be a responsible gun owner living in California – challenges and all.  And although Jeff Charles no longer lives in California and is a current

resident of Austin, Texas, his announcement that he is now a proud gun owner is well worth watching (click HERE to read and watch).  We appreciate that he shared how he came to the decision, what gun he ultimately purchased, and his desire to become proficient.  May he have many days of fun at the range!