The following was written in response to an op-ed media request.  As it was not published, GOC decided to post it here.

Governor Newsom has some Texas-sized anger and he’s taking a swipe at gun manufacturers in the process. His response to the Supreme Court ruling that allows a Texas abortion law to stand while legal challenges continue, is to push California legislation that would open the door to lawsuits against manufacturers or sellers of assault weapons and ghost guns parts.

Yes, much has been written about Newsom’s most recent aim at assault weapons, when he tweeted “If [Texas] can ban abortion and endanger lives, [California] can ban deadly weapons of war and save lives.”   That said, GOC certainly isn’t going to give him a pass on such an outrageous threat. 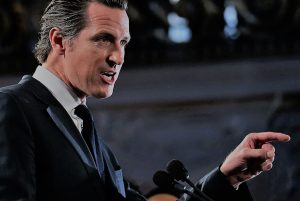 so said, “If the most efficient way to keep these devastating weapons off our streets is to add the threat of private lawsuits, we should do just that.”

To use the Governor’s reasoning, why then – in the name of all things “equitable” wouldn’t it be appropriate for someone to sue an automobile manufacturer – or more to the point, Newsom’s own winery – for a fatal drunk driving crime after imbibing there? The same logic would apply to the makers and sellers of eating utensils such as forks and spoons, because they lead to overeating and the possible deadly consequences of heart disease or diabetes.

Clearly, that would be an irrational undertaking, but so is Newsom’s move to make legal gun manufacturers liable for the illegal act of another. Not only is it firmly unconstitutional – given that the 2nd Amendment is explicitly spelled out in the Bill of Rights, but it’s also a clear violation of federal law. In 2005, Congress passed The Protection of Lawful Commerce in Arms Act specifically for this reason – to protect the firearm industry from lawsuits that target the actual gun rather than the person whose finger was on the trigger. The act does not protect anyone who commits a crime, only those involved in the legal commerce of a legal product.

Nationally recognized legal scholar Jonathan Turley had some interesting take-aways in response to Newsom’s edict. “Good luck with that” he said, emphatically stating that it may be “successful politically, but not without costs to the state and potential litigants.”  In other words, it’s a good amount of showboating designed to appease his liberal base.

Turley has written extensively on legal theory and constitutional law – and when Newsom stated the threat of private lawsuits would be “efficient”, Turley said the governor was “openly acknowledging that this law is meant to achieve indirectly what the state has failed to do directly: reduce gun ownership” and that “With his bravado, Newsom has guaranteed that courts will strike down his law as an open “mockery” of gun rights precedent.”

It’s also worthy to note that California already has an existing ban on “assault weapons”, so why create a path for someone to sue when that something is already illegal? Plus, Newsom’s “weapons of war” comment shows an incredible lack of understanding of the very product he’s aiming to ban. In fact, it was the California Legislature that coined a new political term – “assault weapon” in 1989. Prior to this, the term was not found in any military or firearms related lexicon. The goal of the legislature was ultimately successful, which was to demonize firearms that looked scary – even though they functioned in the same manner as many other guns yet were visually less intimidating.

To add to the nonsense, there isn’t lick of evidence that such a scheme would put a chill on gun violence. Even a casual examination of the Department of Justice’s 2020 Firearms Used in the Commission of Crimes Report indicates the number of occasions that a California defined assault weapon was used in the commission of a crime is miniscule.  Thus, Newsom’s idea is nothing more than a punitive strike against those who legally manufacture a product that other people don’t like. It’s as simple as that.

It’s unfortunate that the Governor has not taken into account that Californians – with each day that passes – are feeling increasingly more insecure about their personal safety.  Yet Newsom and the Legislature persist in their efforts to provide an out for the lawless – whether it’s a reduction in penalties, elimination of bail or a dismissal of charges. The net results are not surprising – there’s a big green light to go forth and break the law.  Never before has the term “slap on the wrist” been more accurate.

The Supreme Court’s Texas abortion ruling stipulated they would not prevent a law from going into effect while a challenge continues through the legal process. If Governor Newsom takes that to mean that he has carte blanche to attack the Second Amendment, he has an uphill battle – both at home and in the courts.