New polling about who the public believes are better equipped to protect the public in a mass shooting incident should make progressives quake in their Birkenstocks.

According to a survey by the Trafalgar Group in cooperation with the Convention of States Action, Americans have more faith in an armed civilian rather than law enforcement or federal agents.  The Daily Wire reported findings that “Respondents chose armed citizens as the best protection by 41.8% to 25.1% for local police and 10.3% for federal agents. About a fifth chose none of the above – 22.8%.”

This is a stunning revelation, yet in light of recent events across the country, it is not surprising.

According to the Daily Wire, “The survey results were published Monday, a day after an armed civilian shot and killed a mass shooter in a mall in Greenwood, Indiana. The incident took place after the poll was taken, but may buttress a plurality of Americans’ belief in armed civilians.”  It’s important to note as well that the poll was taken after the recent horror in Uvalde, Texas, where an armed gunman slaughtered 19 children and two teachers.

The latest confidence in armed civilians is not likely to see much newsprint, nor will many talking heads be chatting about this when the 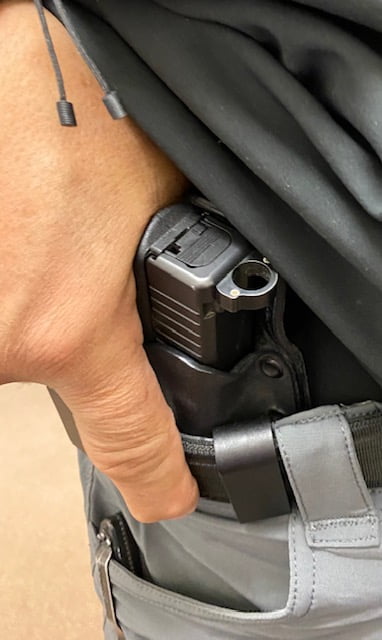 topic of “gun violence” comes up.  It just doesn’t fit the story they want to tell.   The progressive left and their media cronies are much more comfortable leaning into a “flat-earth” mentality; it’s easier to believe a fairy tale than to acknowledge a reality that contradicts a fraudulent philosophy.

The young man from Indiana who stepped in to stop a murderous assassin is nothing short of a hero.  He was thoughtful, well trained, and in 15 seconds did what 400 police could not do in Uvalde. GOC has long been an ardent supporter of law enforcement, so this is a positively soul-crushing fact to report.

A piercing commentary by Armed American News states “If the Uvalde 400 need a lesson on how to respond decisively to an active shooter – and they certainly do – they need to look at the heroic actions of 22-year-old Eli Dicken in the Greenwood Mall….Eli didn’t have a plate carrier or a ballistic helmet. He wasn’t covered in MultiCam. He was wearing shorts and a t-shirt. He didn’t have an M4 with advanced optics. He carried a Glock 9mm. He didn’t have a Body Bunker or a cover team. He didn’t play games on his phone or apply hand sanitizer, as some of the Uvalde officers were caught doing. He didn’t need to be told what to do. He didn’t wait for backup. He acted immediately with precise violence of action, and he acted on his own. Eli took care of business, and at 40 yards.”

In a press conference Greenwood Police Chief James Ison said, “I am 100% certain that many more people would have died last night if it wasn’t for his heroism.”

In the recent United State’s Supreme Court landmark ruling (NYSRPA v Bruen), Justice Samuel Alito concurred with the majority decision by Justice Thomas, stating “Ordinary citizens frequently use firearms to protect themselves from criminal attack. According to survey data, defensive firearm use occurs up to 2.5 million times per year. “

The only people who should be threatened by an armed citizen is a bad guy who tries something criminal.  That’s it. As we have been preaching for years, there is zero evidence that lawful concealed carriers are a danger to society.  ZERO.  In fact, they are among the most law-abiding subsection of people in the nation. Thus, it defies reason that some are actually more fearful of a law-abiding citizen with a gun than they are of some gang-banger who gets guns off the street.  We need more Eli Dickens in this world – not less.