GOC’s founder was fond of saying “in politics, you have no real friends, only acquaintances, some better than others, but sooner or later they will all disappoint you.”

Senator Richardson was right decades ago and his words are prophetic to this day.  He would not be surprised in the least by something that happened in the final days of session.

This past July, in the aftermath of Governor Newsom’s signature on AB 2571, GOC and CRPA filed a lawsuit (Jr Sports Magazine v Bonta) to challenge the bill, which banned all marketing regarding firearms and related products to anyone under 18 years of age.

AB 2571 allowed virtually anyone to file a civil lawsuit against dealers, distributors, manufacturers and publishers in the firearms industry if the plaintiff felt that firearm or related product marketing was directed at or attractive to anyone under 18. In fact, AB 2571 completely halted all youth activities including shooting and hunting camps, Boy Scout, high school and private shooting teams and firearm safety programs as well.

Because this was so o 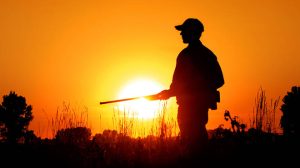 utrageous, we knew we had to step in legally in order to protect the youth programs and lawful firearms and related commerce in California.

GOC and CRPA requested the court issue an injunction to prevent the law from going into effect, and a federal judge was ready to issue a ruling.  We were confident in the legal steps we had taken to shut down the entirety of the law until the judge informed us that his ruling would be delayed pending a legislative “fix” that had been introduced in the closing hours of session.

“In politics, you have no real friends, only acquaintances, some better than others, but sooner or later they will all disappoint you.”

GOC didn’t want a “fix” – we wanted to dump the entire thing.  Former Assemblyman Jay LaSuer would often say that “you can’t polish a turd” and believe GOC when we say that AB 2571 was a big turd from the get-go.

Imagine our surprise when we learned, however, that “hunting” interests were pushing the supposed “fix” which “carved out” only a portion of the law, basically exempting any “advertising that is offering or promoting classes or events related to firearm safety, hunting, or sport shooting, or promoting membership in any organization.”

Were any of the Second Amendment organizations who were pursuing a broad legal remedy to implementation of this bill informed of the late-night maneuver?  No.  What’s even more troubling is that hunting groups – with whom GOC has worked cooperatively for years on many items of mutual interest – decided to carve out more than just language from the law at hand – they also carved out any communication with pro-2A organizations.

What happened?  Have they forgotten that without 2A organizations fighting for the rights of private citizens to own firearms that hunting would be a tad more difficult?  What guns could be used for hunting?  What type of ammo?  What about new restrictions on transporting guns?  What about storage of hunting rifles? Are there new liability issues out there? These are just some of the battles we have fought on behalf of ALL gun owners, which have always gone hand in hand with the hunting community.  But now, there are whispers in legislative halls that the ”2A groups just don’t get it….”

Oh, believe you me.  We get it alright.

Ultimately, the carved-out “fix” language was stuck in a budget trailer bill – sure to be signed by the Governor – which will permit youth shooting to continue.  But in doing so, people with whom we have worked for years knowingly undermined our entire legal strategy, thus ignoring the bigger picture and heading down a path away from the Second Amendment.

The effect of this “fix” is that the lawsuits filed by CRPA/GOC and a second one filed by a coalition including the NRA, NSSF, and others, have been significantly changed…and weakened.