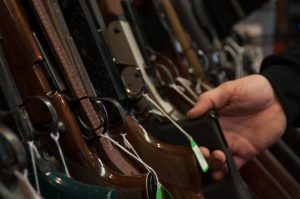 Nothing makes a Leftist foam at the mouth more than reading the news about the explosion of gun sales. And it has to be like pouring salt into an open wound to learn that a hefty number of the 39 million gun purchases in 2020 and 2021 are not only women, but a good percentage come from traditionally “gun-less” minority populations.

Obviously, this is great news for the 2A community – the more gun owners the better! What’s even more significant is that according to the National Shooting Sports Foundation, there were more than 5.4 million first time gun buyers in 2021 and 8.4 million in 2020.  That’s 13.8 million brand, new gun owners in the USA.

Here’s where it gets interesting for us in California:

In the lawsuit challenging California’s ban on semi-automatic firearms and magazines (Miller v Bonta), Judge Roger Benitez mandated that Department of Justice provide gun sales statistics to the court.  GOC is quite certain that the DOJ was more than a little irritated; they were forced to admit the following (excerpted from Ammoland ):

“Blake Graham, Assistant Director of the California Department of Justice provided the following in a sworn document to the court:

These figures account for all firearm sales conducted through FFLs in the state, including private-party transactions, consignments, and pawn sales.

Graham also provided the number of first-time firearm purchasers, as well as could be determined:

Doing the simple math, that means between 2020 and 2021, California added 412,059 NEW GUN OWNERS.  That is an increase of 32% in 2020 and 24% in 2021 – and that’s using only partial data from the Department of Justice (through March 2021).  Clearly, the numbers would be considerably greater with the inclusion of eight additional months.

Whether it was the illogical “defund the police” movement, Leftist district attorneys failing to prosecute crimes or the profound uptick in violent crimes (such as murder), the face of the Second Amendment community is being radically transformed – and that scares the pants off the Left.  Contrary to popular belief about California, the evidence clearly shows that there are literally hundreds of thousands of Second Amendment supporting, gun owners in the state – and the numbers are growing.

For many, the first step in making the decision to buy a gun may have been daunting.  The second step is learning about the importance of firearm safety.  And the third step is about becoming educated – on the responsibilities that come with being a gun owner and understanding your rights.  The Left has no interest in protecting our families and our homes – they want the bumbling government to do it all.  And that’s about as likely to happen as Gavin Newsom stopping his hair gel purchase…