Why would state legislatures across the country – and 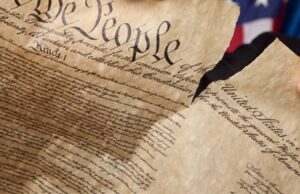 of course, here in California – decide to climb the gun control mountain when they know full-well that they are going to be knocked down by the swift arm of the Supreme Court?  Did they miss the memo on the Bruen decision?

Last June, in a move that sent the Left into a pearl-clutching frenzy, SCOTUS issued a landmark ruling that struck down New York’s concealed carry law and kicked open the door to challenge a host of other restrictive 2nd Amendment laws.  In fact, SCOTUS vacated a number of anti-gun rulings, sending them back to the lower courts with clear instructions to use the Bruen criteria when it comes to assessing restrictions on firearms.

Why then would so many legislators waste the taxpayer’s money and the court’s time when they have been duly notified that failure awaits them?

It’s because they don’t give a damn.

Whether it’s in Illinois, New York, Washington, New Jersey, Colorado or California, deep blue states continue to put the proverbial screws to responsible and lawful gun owners regardless of what SCOTUS rules.

Here in California, Reggie Jones-Sawyer, the former Chair of the Assembly Public Safety Committee gleefully said the quiet part out loud a few years ago.  He did so in response to GOC’s Executive Director Sam Paredes, who had had the nerve to bring up the constitutionality of some legislation before the committee.  With a wave of his hand, Jones Sawyer arrogantly dismissed the issue as if it were an annoying little fly, proclaiming “the Legislature sometimes ignores whether or not it’s constitutional or not – we go ahead and make laws because we’re California and we do it anyways….”

A short time later he followed it up with a public call for the Second Amendment to be “updated.”  Updated you say? You mean polish it up – kind of like a face lift?

The bottom line is that the Bruen decision was not vague.  It was well-defined and instructive. The higher court clearly rebuffed the lower court’s legal gobbledygook approach to the Second Amendment, instead  directing them to adhere to the actual meaning of the words “shall not be infringed.”

Even though it defies reason, GOC is not surprised in the least that Senator Anthony Portantino and his ilk still want to take another crack at the Constitution.  While the Bruen case shut down the very same issues we are fighting here in California regarding where one can carry a concealed firearm, the Burbank Democrat is back at it with a redux of SB 918, which failed in the closing hours of the Legislature last fall.  He clearly has the same attitude as Jones-Sawyer – the mistaken belief that California is “special” and therefore needn’t adhere to SCOTUS or the Constitution. What arrogance!

If they don’t want to look reality square in the face – fine.  But GOC will not go quietly or gently into that good night – rather it is our goal to grind their dangerous Leftist policies into the ground.