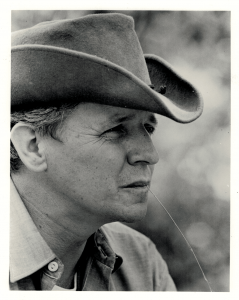 Senator H. L. Richardson was a nationally recognized, twenty-two-year veteran of the California State Senate who focused his extensive political career on the preservation and protection of our Second Amendment rights. An active hunter and outdoorsman, Senator Richardson was vigorously involved on the state and national scene, racking up political victories that spanned more than four decades.

In 1966, H. L. “Bill” Richardson, a successful advertising executive, was elected to the State Senate the same year Ronald Reagan was elected California’s Governor.  Because of his vast hunting and outdoor experience, he was tapped to Chair the Senate Fish and Game Committee, and was elected by his Republican colleagues to a leadership position as Caucus Chairman, a post he held for many years.

In the early 1970’s, the Senator became very aware of the worldwide inroads the radical left were making in politics, most specifically their consistent attempts to disarm Americans. He became a life member of the NRA and, with their encouragement, authored the state preemption of firearms law which in 2009 resulted in overturning the recently enacted San Francisco handgun ban.  He was subsequently elected to the NRA Board of Directors, where he served for over a decade.

In 1975, the radical left introduced legislation to ban all handguns in California. The bill generated strong support from elected officials and the main-stream media, which triggered Richardson to mobilize enraged citizens from throughout the state.  It was at this point that Gun Owners of California was born, a direct mail attack was unleashed and the bill was defeated.  Gun Owners of America soon followed and Richardson’s keen skill for mobilizing single individuals toward a common goal launched a very effective political movement that continues to focus on the preservation of the Second Amendment.

During his 22 years in the California Senate, Richardson showed that a determined application of confrontational politics could produce big victories.  While in office, in addition to GOC and GOA, Richardson organized multiple Political Action Committees [PACs] that raised hundreds of thousands of dollars to fight the political left. One such committee was “Law and Order Campaign Committee” which led the charge to defeat Chief Justice Rose Bird and two other liberal members of the state Supreme Court. The three anti-victim justices were defeated by over a million votes. LOCC then pushed for the return of capital punishment, a move strongly opposed by the liberal leadership of both houses and Governor Jerry Brown (during his first term in office). Using massive direct mail pressure, the bill passed both houses but in spite of heavy support from the public, the bill was vetoed.  LOCC refused to give up, and using targeted direct mail and the mobilization of concerned citizens, Governor Jerry Brown’s veto was overridden.

Richardson took this sharp political insight and wrote a virtual “game plan” for political wins with his controversial book, Confrontational Politics.   He clearly explained his core belief that politics should be a struggle of competing ideologies, not a game of compromise and accommodation.  A published author, other works include “Slightly to the Right,” an entertaining yet informative book written in the 60’s that taught conservatives how to debate their liberal friends.  It became an immediate conservative classic which sold over 250,000 copies nationally.

“What Makes You Think We Read the Bills?” was written while Richardson was in the Senate and provides rare, yet funny insight into the real-life workings of the Legislature.  It has been used as a textbook in political science classes throughout California.

Richardson also combined his love of writing and extensive knowledge of the American West to write a series of Western mysteries, beginning with “The Devil's Eye”, and followed by the sequel “The Shadows of Crazy Mountain.” For a change of pace, he authored “Split Ticket,” a political comedy based in Sacramento, California.

His unique perspectives and use of humor kept him in demand as a speaker and writer, and he provided colorful media commentary on a host of issues.  He was the recipient of numerous awards and accolades from fellow Second Amendment organizations, and received such notable recognition as Outstanding Statesman Award from the Conservative Caucus, Law and Order Award from American Educational League, the Guardian of Freedom Award from (YAF) Young Americans for Freedom and the Ronald Reagan Freedom Fighter Award.  He was also recognized for his exceptional work in law enforcement, having earned commendations from California homicide investigators, swat teams, police, parole and correctional organizations.

Senator Richardson had three children and seven grandchildren.  He was married to his beloved wife Barbara for 57 years.  He resided in the foothills of the Sierra Nevada, east of Sacramento, California, until his passing on January 13, 2020.

Legislator of the Year Awards received from: