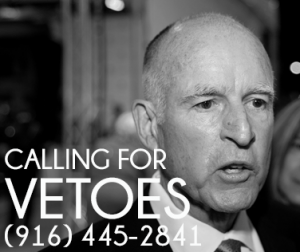 Operating true to form, the California legislature squarely placed their target on those who abide by the law instead of those who abuse it.

Both the Senate and Assembly Democrats took disgraceful advantage of their majority status, and jammed through a host of egregious anti-2nd Amendment bills before leaving for summer vacation today.

The bills – which pertain to issues from ammunition registration, standard capacity magazine bans, firearm transfers and onerous restrictions on gun purchases are on their way to Governor Brown’s desk.

GOC has already sent letters to the Governor requesting vetoes of each measure, and asks that you call asking for the same at (916) 445-2841.

“The ‘rule of the majority’ is the only one that matters to the Democrat leadership,” said Sam Paredes, Executive Director of Gun Owners of California.  “With a simple majority vote, they can do whatever they want – whenever they want – and with no consequence.”

Exploiting the Orlando tragedy and even going so far as to say that ammunition is the “oxygen that fuels violence,” Senator Kevin De Leon and his Assembly counterparts brazenly violated the rules of each house with multiple, post deadline maneuvers, thus circumventing mandatory public notice and testimony.

“It defies all things reasonable – and is frankly arrogant – that these people actually believe a terrorist is going to pay one lick of attention to their bills,” said Paredes. “But to those who had the unmitigated gall to place the blame of Orlando on everyone but a terrorist madman, the blood of future victims might actually be on their hands, for they are the ones responsible for disarming not the criminal – but the law abiding.”

Once the bills reach the Governor’s Desk, he has 30 days to ether sign or veto.  For copies of our veto letters, click here.

“We may be battered and bruised – we may be down for the day, but we certainly aren’t out,” said Paredes.  “GOC encourages all supporters of the 2nd Amendment to contact Governor Jerry Brown and request his veto of each of the bills below.”

AB 1673 (Gipson): Redefines “firearms” to include items that are not firearms.

AB 1674 (Santiago): Bans buying more than one firearm within a 30-day period.