The election is over … or is it?  When all is said and done, we are optimistic that the 2nd Amendment will come out ahead, and we are working overtime to make sure this stands.  We picked up seats in Congress and it’s absolutely crucial that we keep this upper hand.  This is why GOC is continuing in partnership with Gun Owners of America – they are waging battle on the federal level, because this is where we can make a real difference.  We pledge to leave everything we have on the field – because what happens nationally will have enormous implications here in California.

The majority of our successes in recent years have been in the courts, and preserving control of the United States Senate is the only thing that will obstruct a Biden/Harris administration. Both have made no bones about the fact that they want to restrict access to firearms, and by keeping the Senate in pro-2A hands, we will be able to stop left-wing presidential nominations to the Supreme Court. Currently, with the robust, pro-gun appointments President Trump made to SCOTUS, we have a solid pro-Constitution majority.

This alone is reason enough to have a spirit of hopefulness. Literally hundreds of millions of dollars were spent against us by the Michael Bloombergs of the world, yet their socialist revolution did not take place – in California or across the U.S. In fact, according to a post-election piece in the San Francisco Chronicle, the left has lost ground here in California with the defeat of 3 seats in Congress. GOC is proud to have assisted in this effort.

We are keeping close tabs on the critical run-off races in Georgia, as well as others that have yet to be finally decided.  Even though we are a statewide organization, it is to our benefit – and yours – to be fully aware of what happens in California and around the country. Freedom waits for no one and we must preserve the freedoms we have for future generations.

We also must take every opportunity to learn – because in reality, the 2022 election season has already begun for GOC. Our founder knew how to lead, and he once said: 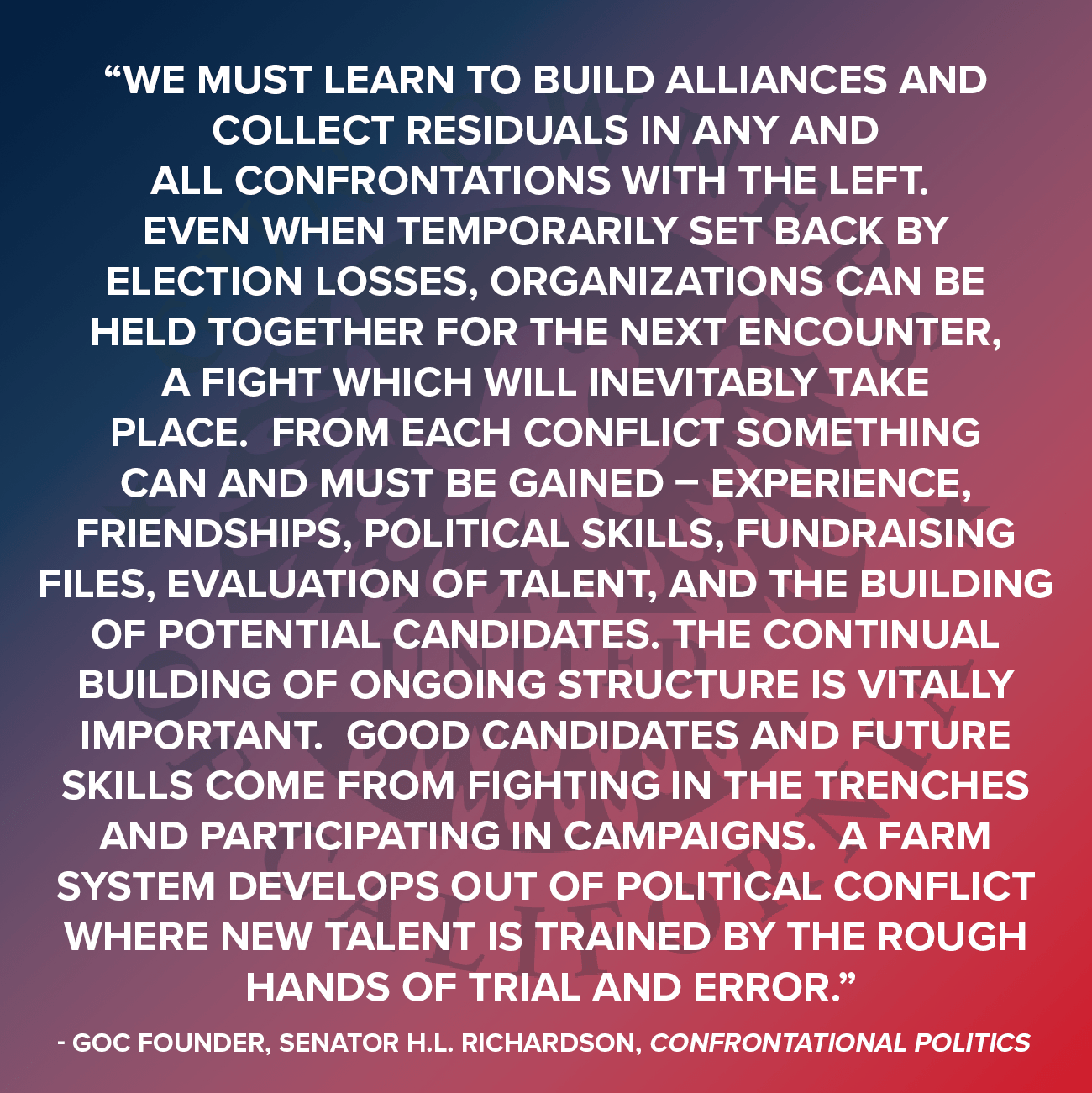 We consider it an honor to stand with you on behalf of these principles. Will you join us as we continue to move toward these goals?

Lessons Learned From the 2020 Election | Ammoland
This is a very interesting analysis on the positives and negatives of 2020.

A Pro-2A Majority is Within Reach! | GOA
How the Georgia Senate races hold the key.

Biden Vows Swift Action On Gun Control | Bearing Arms
Shame on those who didn’t believe him.

The Post-Election Gun-Buying Surge Is Underway | Bearing Arms
This is a natural result of a Biden presidency.

Biggest Loser: Establishment Media; Can It Ever Be Trusted Again? | Ammoland
In a word, NO.

What Amy Coney Barrett Could Mean for California Gun Laws | Peninsula Press
The impact could be dramatic IF the court follows an “originalist” perspective.

Lawsuit Against Cabela’s Can Move Forward | Truth About Guns
Suit for selling ammo to 19 year old gets green light.

NSSF: Nearly 7 Million First-Time Gun Buyers from January – October | Breitbart
This figure is up from 2 million from just months ago.