Both resolutions introduced in the Legislature this year beat the anti-gun drum hard – citing the same old manipulated statistics that get their base riled up.  They are moving through the legislative process but they are 100% meaningless because not one word in either AJR 4 or AJR 5 is binding.  Not one.  In other words, they don’t carry the fo 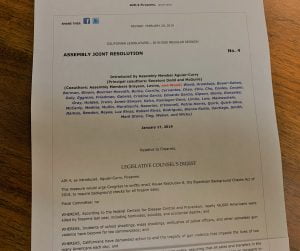 rce of law one iota.

If that’s the case, why then would our elected lawmakers (who are elected to “make laws) spend one minute – and our tax dollars – on something that isn’t worth the paper it’s printed on?

It’s easy to boil this baby down:  it gives our elected blowhards an opportunity to stand up in front of colleagues and cameras and…um…blow hard.

Joint resolutions sponsored by either a member of the Senate or the Assembly are simply an expression of the legislator’s point of view on some current event that includes a lot of hoity-toity “whereas” and “be it resolved” legislative lingo.  It requires the approval of both the Assembly and Senate as well as their respective policy committees, which means there’s multiple opportunities for legislators to postulate and pontificate. It’s then forwarded to Congress.

What a waste of time.  A resolution sent to Congress by a smug and superior California Legislature is like waving a piece of paper in a hurricane. It’s gonna disappear.

The resolution process requires legal staff to draft the language, policy staff in both houses to analyze the language, plus Democrat and Republican Caucus staffs also spend time reviewing it.  It’s also a big time-sucker for GOC. There’s no way we are going to let them yammer on in committee, using dishonest data and outright lies about the “scourge of gun violence.”  GOC is consistently at the podium giving testimony to the truth.

Just this week, while testifying against both AJR 4 and AJR 5 in Senate Public Safety Committee, GOC Executive Director Sam Paredes invoked the words of “Big Daddy” Jesse Unruh, former Assembly Speaker and much beloved icon of California’s elected Democrats. He said “I can tell you exactly what happens to those resolutions when they get to Washington DC…they come in the mail to the Congressman’s office and they go straight into the round file.  There is absolutely no point in doing them except to cause controversy and provoke debates on the floor that take a lot of our time. They are useless.”*

There are, of course, other legislative resolutions that aren’t sent to Congress – they are purely for the benefit of Californians and sometimes highlight issues of real significance such as the Holocaust Memorial and the American Legion.  But unfortunately, much of the time they take on other “less important” matters such as declaring May 4 as Star Wars Day and commemorating International Yoga Day, School Breakfast Week, Day of the Dance and even Compost Awareness Week.