Watching the Democrat presidential candidates try to anti-gun each other would be entertaining if it weren’t so sinister, but that’s exactly what it is.  Michael Bloomberg, however, is leading the charge against 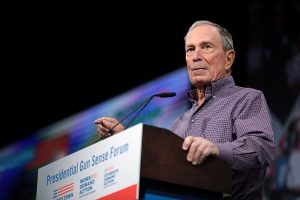 American gun owners and he’s doing it with a lethal combination:  money and lies.  He’s already spent over $200 million in an attempt to buy the presidency, and even the New York Times says “The Bloomberg Campaign Has a Waterfall of Cash.”  A good chunk of that dough was spent in trying to get Super Bowl viewers to buy into his propaganda that “2,900 children die from gun violence every year” in the United States. This is a lie.

Reason Magazine’s Jacob Sullum has skillfully dissected and refutes every lie Bloomberg puts forth, and with permission, GOC is pleased to reprint his very informative piece on this issue.

Michael Bloomberg’s Super Bowl ad, which presents the Democratic presidential contender as a brave advocate of public safety who is not afraid to take on “the gun lobby,” claims “2,900 children die from gun violence every year” in the United States, which is not true. That number includes young adults as well as minors, and it includes suicides as well as homicides.

Bloomberg’s campaign cited Everytown for Gun Safety, a Bloomberg-backed group, as the source of the number used in the ad. “Annually,” the organization said in June 2019 fact sheet, “nearly 2,900 children and teens (ages 0 to 19) are shot and killed.” The ad changed “children and teens” (including young adults) to “children,” presumably because that makes the deaths more shocking, strengthening the emotional case for the gun control policies Bloomberg favors.

According to to the U.S. Centers for Disease Control and Prevention, FactCheck.org notes, the average number of firearm-related deaths involving Americans 17 or younger from 2013 through 2017 (the period used by Everytown for Gun Safety) was about 1,500, roughly half the number cited by Bloomberg. Furthermore, nearly two-fifths of those deaths were suicides, meaning the number of minors killed each year by “gun violence,” as that term is usually understood, is about 73 percent smaller than the figure cited in Bloomberg’s ad.

The case highlighted by the TV spot does not actually fit into any of these categories. The ad features Calandrian Kemp, whose 20-year-old son, George, was shot to death in 2013 at a park in Richmond, a Houston suburb, during a confrontation that a Texas appeals court described as “gang-related.” According to the court, “two groups of young men, most of them teenagers, had met that night for a fight.” Two of them, including an 18-year-old, Corey Coleman, fired the handgun rounds that struck Kemp. Coleman was convicted of murder and sentenced to 34 years in prison.

An honest discussion of this issue would start by clearly defining the problem. Bloomberg fails that test by using a highly misleading number referring to “children,” half of whom were adults, and by using a definition of “gun violence” that includes suicides, a very different problem that is likely to require different solutions.

“Ask any grieving parent whose 18- or 19-year-old son or daughter was shot and killed, and they will tell you they lost a child,” a Bloomberg campaign spokesperson told Fox News in defense of the ad. “There are simply too many of these deaths, and Mike has a plan to prevent them with common-sense gun safety laws.” Everyone is somebody’s child, of course, so by this reasoning all firearm-related deaths involve children.

Leaving aside Bloomberg’s slippery numbers, how well do the “common-sense gun safety laws” he supports address the problem exemplified by George Kemp’s death? Many of Bloomberg’s ideas, such as banning “assault weapons,” passing more “red flag” laws, and closing the “boyfriend loophole,” have nothing to do with cases like this. Others seem more relevant but are unlikely to have much of an impact.

Bloomberg wants to require background checks for all firearm sales and ban purchases by anyone younger than 21. Those rules would be effective in preventing murders like George Kemp’s only if young men like Corey Coleman are currently obtaining handguns from sources that can reasonably be expected to follow the new requirements, which is highly doubtful.

Bloomberg also wants to “make straw purchasing and trafficking stand-alone federal crimes, with serious penalties for offenders in order to help stop illicit sales.” Yet people who buy guns from federally licensed dealers already have to certify that they are not buying the guns for someone else, and lying about that is a felony punishable by up to 10 years in prison. The same penalty applies to anyone, including a private seller, who “knows or has reasonable cause to believe” that the person to whom he is transferring a gun is legally disqualified from owning it.

Finally, Bloomberg supports allocating “at least $100 million annually for local violence intervention programs,” which might make homicides like this less common if those programs are effective. Everytown for Gun Safety cites several programs it considers promising. Whether it makes sense to spend more taxpayer money on such programs is a subject worth discussing. But Bloomberg’s dishonest, inflammatory approach seems designed to avoid that sort of substantive debate.

Jacob Sullum is a senior editor at Reason.