Please – Don’t Confuse the Legislature With the Facts!

Saying something over and over again doesn’t make it true, but this is a super popular tactic for the Left and the media swallows it like a big fat fish.  Every.  Single.  Time.

The gun show “loop-hole” baloney was front and center yesterday as the Assembly Public Safety Committee debated the merits – and lack thereof – a proposal that would prohibit gun shows on state property.  The spons 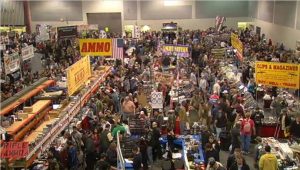 or of the bill, SB 264, is Dave Min, a hard-core progressive who plays fast and loose with the truth when it comes to anything gun-related.  He was telling some serious Pinocchio-style tales and we were half expecting his nose to poke his colleagues as they sat on the dais listening as he presented his bill.

Min said that gun shows are a primary source for underground guns, yet he had no evidence to prove his point.  He was embarrassingly misinformed – not knowing that every, single firearm-related transaction at a gun show – whether it’s a gun, ammunition or pre-cursor part must follow every, single law required by brick and mortar businesses.  Every.  Single. Time.  He disputed the fact that gun shows in California are safe events – hinting that they are a hot bed of crime and not “family friendly.” One thing that can be repeated over and over again – because it is true – is that gun shows in California are notoriously crime-free, which has been verified in public testimony by none other than our own Department of Justice.  Again, the big-bad-bogeyman of gun show danger is quashed.  The hearing was rife with conflated statistics applied to California from other states and Min essentially recapped every worn-out gun show lie out there.

What’s more, Min, who served as a law professor at UC Irvine prior to his election in 2020, demonstrated in phenomenal form how very little he knows about the Constitution and 2nd Amendment case law.  In a gross misrepresentation of the landmark case McDonald v Chicago, Min remarked that the 2nd Amendment – as applied to individual states and local communities – pertains to the militia.

This was a good moment for GOC’s Sam Paredes to give the former law professor a civics lesson that in McDonald, the Supreme Court declared the 2nd Amendment right for individuals to keep and bear arms for self-defense is a fundamental constitutional right under the due process clause of the 14th Amendment, and therefore applies to state and local governments, as well as the federal government.  Min quietly responded that he was not a “constitutional lawyer.”  Well now, that’s a given.

The Portantino bill is just one more stupid example of how the Legislature works, which is to clarify a bill that needed clarifying, and then further clarify the clarification that was required in the first place.

GOC also went toe-to-toe with Senator Portantino on his SB 715, which takes a carving knife to how California handles the loaning of firearms and youth outdoor shooting sports.  His bill messes with an already convoluted Penal Code and muddles it up further with ridiculous definitions, added fees and restrictions.  The Department of Justice already has a tough time explaining the law to concerned gun owners who simply want to stay out of trouble – their advice is often “call an attorney” – and now this?

The Portantino bill is just one more stupid example of how the Legislature works, which is to clarify a bill that needed clarifying, and then further clarify the clarification that was required in the first place.  That’s the nature of the California legislative process.

It’s too bad, but hardly surprising that the Assembly Public Safety Committee gave both SB 264 and SB 715 a thumbs up – surprisingly, though, anti-gun Assemblyman Quirk laid off the bill citing some pretty valid concerns.  Be assured, GOC will continue our efforts to fight the lies, the statistical manipulation and yes – the stupidity that goes on under the dome in Sacramento.