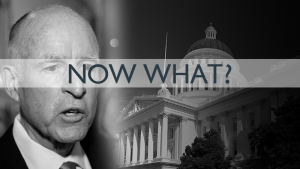 Last week the Legislature rammed through the most comprehensive package of anti-gun bills in California history, and to reemphasize the scope of this 2nd Amendment hit, Governor Brown “cut the Constitution off at the knees and kicked us between the legs…”

Painful?  Yes – but fatal?  Absolutely not.  We are evaluating, strategizing and moving forward because yes – there is work to be done and action to be taken.  With the swift exploits of both the Legislature and the Governor, the full fallout remains to be seen, but we want YOU to know WHAT passed, WHEN the bills become effective and HOW it will impact your life as a gun owner.

To complicate matters, the Newsom Initiative will appear on the November ballot, even though several of the bills signed by Governor Brown fulfill the initiative’s chief components.  While it is technically no longer necessary, Newsom still plans to move forward, having ignored the deadline to have the language pulled from the ballot.  We will be following this closely and update you often.

This is the most complex of the bills that were signed by the Governor.  It will supersede the chief components of Proposition 63, the so-called “Safety for All” initiative by Lt. Governor Gavin Newsom which is set to be on the November ballot – whether enacted by the voters or not.  The bill does the following:

Please be assured our skilled team of attorneys are sorting through every detail of each measure – determining the smartest, most effective way to move forward.  We know that being on the offensive line is far better than playing defensively – and retreating is never an option for GOC.  We need you to forward this and every email you receive in the future to your friends and family.  Urge them to join GOC or other groups fighting to protect the 2nd Amendment.

Our phones have been blowing up from people who are so shocked they can barely speak – they had no idea any of this garbage was happening!  This is an effort that requires more than shaking our heads when we hear a news report.  We can’t just sit on our couches and watch as our rights are pulled from under us.  It’s going to take money.  It’s going to take ACTION!