Courage is defined as 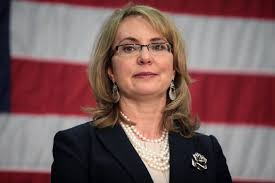 the “mental or moral strength to venture, persevere, and withstand danger, fear, or difficulty” and from GOC’s perspective, taking away an individuals’ constitutional rights doesn’t take courage – it takes dishonesty and bullying.

As long as the anti-gun crowd trots out manipulated “gun violence” data, courage has nothing to do with moving their issue down the road.  Every human being of sound mind wants to stop gun violence, but when you tangle up statistics to the degree that the law abiding are in the cross hairs, something smells awfully bad.

Giffords has a painful history that we would never seek to minimize – she was shot in the head by a crazed gunman in Arizona where six others were killed and 18 wounded.  Her injuries were life threatening and her arduous recovery included learning to walk, talk, read and write and she deserves kudos for her hard work in regaining much of her physical abilities.  In the wake of this personal tragedy, however, she and her husband established a foundation dedicated to fighting gun violence – a noble cause in theory but their push for gun control will never rid the world of evil.

At the State Capitol press conference this week, Giffords joined a bevy of legislators to announce their plans to further tighten the noose around the necks of lawful gun owners.  Even though we have some of the most restrictive controls in the nation, they yearn for more.  Is it a balm to their souls to root out the bad guys by going through the good guys?  We don’t know.

What we do know, however, is that more guns in the hands of people who respect the law does not equate to more gun violence.  Conversely, the opposite is true.

Following up on the press conference for the California Globe, Katy Grimes writes “Despite that most guns used in the commission of a crime are obtained illegally and off the street, California lawmakers are introducing many more gun control bills this session…”

Grimes also reports “Giffords says up to 80 percent of firearms used for criminal purposes are obtained without a background check. The more accurate statement is that 92.3 percent of guns used in a crime were stolen, bought in the black market, borrowed, purchased or rented from a friend or family member, according to the U.S. Department of Justice…” and “Between 2007 and 2015, murder rates dropped 16 percent and violent crime rates dropped 18 percent, even though the percentage of adults with concealed carry permits rose by 190 percent (as reported by the Heritage Foundation).   This quashes the argument that more guns means more crime.

It’s foolish not to be statistically and intellectually honest on this contentious issue.  We must acknowledge whether deaths and injuries are from suicide, homicide or accidental – these sub-categories are critical in making policy decisions.  To do otherwise incites needless fear: consider that most have no clue that a full 60% of gun deaths are from suicide.  And then there are reports that vast numbers of American kids are shot daily, but this, too, is entirely misleading because “kids” includes children up to 18 years of age.  Again, citing the CDC, 77% of gunshot injuries happen to teenagers between 15 -17, and the majority are from male-on-male gang related shootings which turns the narrative flat on its head.

Polls indicate that people want more gun laws, but those same people have no idea that there’s always another side to the story.  That’s why GOC will continue to make certain that California citizens are not only armed, but informed.