When July 1, 2019 rolls around, there are going to be a lot of people caught unaware when they find out they have to provide everything but their firstborn kid when buying ammunition.

Sad but true – ammo registration is right around the corner and a lot of unsuspecting folks are going to be mighty angry when they head to Walmart to buy a single box of shells.  Regulations were just released by the Depa 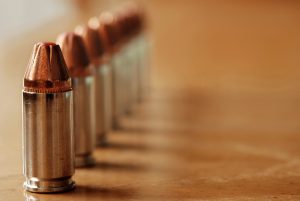 rtment of Justice and as usual, they took their sweet time – moving slower than molasses in releasing the final product.  Gun dealers have been on pins and needles waiting to see to what degree DOJ was going to, uh, screw them.

The background check process is the most significant problem by far and shows they are simply not able to follow the law.  Current California law mandates the background check to be completed instantly.  Given this requirement, why then would DOJ regulations issue “Ammunition Transaction Numbers” allowing purchasers to “monitor the status” of the background check? IF BACKGROUND CHECKS ARE REQUIRED TO BE INSTANT, WHY WOULD ANYONE NEED TO “MONITOR THE STATUS” OF ANYTHING?  Once again, the Department placing themselves above what is legally required.

Obviously, the collection of personal data is equally as contemptible.  Things are pretty darn rotten when voting requires NO ID whatsoever but buying ammo requires a “licensed vendor” to collect data on:

If that’s not bad enough, the Department is also illegally requiring citizenship status – from legal non-residents.  This is rich – DOJ wants those with legal residency in the United States to document the origin of their citizenship while California wants to expand free medical coverage to those who are in this country illegally.

Thank goodness a lawsuit** has been filed that very effectively challenges this garbage, because before it even begins, ammo registration is a big cluster.  The Department has already indicated that they are not capable of complying with current law.  What an example for the people of California…

***ADDENDUM: There is NOTHING in statute or regulations issued by the Department of Justice that requires a REAL ID for the purchase of ammunition beginning July 1, 2019. If this changes we will inform our members ASAP. For details about the new regulations, we strongly encourage you to read the very thorough CRPA FAQ which can be found at http://michellawyers.com/wp-content/uploads/2019/05/Info-Bulletin-re-New-Ammo-Regs.pdf