Last week, the Wall Street Journal published an op ed by prominent firearm policy researcher  John Lott Jr., and big shocker – the anti-gunners immediately got their knickers in a bunch.

Entitled Mexico’s Soaring Murder Rate Proves Gun Control Is Deadly, Lott very effectively spells out some sound reasons as to why our southern neighbor has become a mecca of murder.

“Another month, another record number of murders in Mexico” reports Lott.  “For the first nine months of 2019, Mexico had 25,890 murders—almost six times as many murders per 100,000 people as in the U.S.” 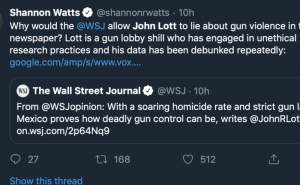 owever, to marvel at the sheer horror and atrocity of these numbers, anti-gun fanatics instead are shrieking at the Wall Street Journal for having the gall to give Lott anything other than print space in the obituaries.

And she continued by doing what she does best – being flat-out dishonest – calling Lott a “shill for the gun lobby.”  She knows full well this is bogus but that hasn’t kept her and others in the anti-gun circle from spreading the lie.  On the Crime Research Prevention Center’s website, Lott responded:

“It is a false claim that Shannon Watts and other gun control advocates have floated before and I have responded before. Neither the Crime Prevention Research Center nor I have received a $1 for any of our research. We have that policy posted on our website. Shannon Watts also links to an attack on Dr. Lott in the left wing Vox, but that was also something that we had previously responded to. Not that Watts could respond to our responses, she finds it necessary to keep repeating the same links over and over again.”

In direct response on Twitter, Lott asked “Why is it acceptable for gun control activists like Shannon Watts to always push to keep others off the media – why can’t they ever provide substantive comments on the actual content of what they are criticizing?”

He concluded with “Of course, neither Shannon Watts nor any other gun control advocates responded to my Tweets. As is typical, they attack and then move on.”

Lott’s article is well worth a read. He reports “Mexicans had a right to own guns until 1971, when the constitution was amended to give the federal government total control over firearm access. In 1972 the government passed strict gun-control measures. registered, unloaded, in a locked container, and going from one residence to another.”

For decades Mexico has had only one gun store in the entire country, a military-run establishment in Mexico City. The store’s prices are very expensive, and the most powerful rifle that you can buy there is a .22 caliber.
John Lott – WSJ 10/21/19

Although this sounds eerily familiar as to what Californians face, Mexico has taken private ownership of firearms to a level far beyond what we experience.

“Getting permission to purchase a gun is a feat in itself. Background checks take six months to complete and require fingerprints and an evaluation of the buyer’s employment history. Only 1% of Mexicans possess a license to own a firearm.”
John Lott – WSJ 10/21/19

There’s nothing scary or inaccurate about anything Lott has written – in the Wall Street Journal piece or anywhere else.  That being said, it’s clear to GOC why Shannon Watts and those like her want to shut the John Lotts of the world up.  It’s because the more people know the facts, the anti-gun movement will be just like that Emperor…you know, the one with no clothes.